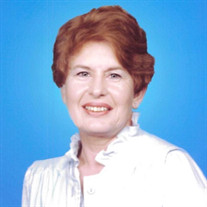 Algen (Louise) Ayers Thurmond passed away on May 31, 2020, at age 92, to begin her new life with her Lord and Savior. She was born May 1, 1928 in Habersham County, Georgia, where she lived until her marriage to James L. (Jim) Thurmond in 1951. Jim and Algen moved to Marietta, Georgia in 1956 and lived here for the rest of their lives except for two years in the early 1960s when they relocated to Perry, Georgia for Jim’s work. They were married for almost 60 years. Algen, with Jim in tow, greatly enjoyed traveling, both domestically and abroad. Algen and Jim joined the First Baptist Church of Marietta not long after moving to Marietta and soon became dedicated members, actively serving in many roles. Algen was a long-time member of the Crusaders Sunday School Class and served on numerous churchwide committees. Service to the Lord was a priority for both Algen and Jim. Another special interest of Algen’s was participation in the Four Seasons Garden Club of Marietta where she was a long-time member. She served in most, if not all, of the officer positions for that club as well as various officer positions for the Marietta Council of Garden Clubs. Algen’s personality might be best described as sociable or gregarious. She greatly enjoyed spending time with her many friends and would often engage strangers in casual conversation. She was a dedicated mother to her sons and later a substitute mother to her first granddaughter after the loss of Miriam’s mother to cancer. She is survived by two sons, James L. (Jaime) Thurmond, Jr. with his wife Rebecca currently residing in Mexico City, Mexico, and Andrew Ayers (Andy) Thurmond with his wife Sherry of Marietta; and six grandchildren, Miriam Thurmond Baker (Erik) of Kennesaw, Margaret Thurmond Thomas (Andrew) of Chattanooga, Abigail Thurmond Sloss (George) of Ft. Lauderdale, and Amelia Jean Thurmond, Lucille Louise Thurmond, and Winston James Thurmond, all residing in Mexico City. Also surviving Algen are a sister, Becky Ayers Beacham of Marietta, a brother, Morgan Ayers (Pauline) of Rome, Georgia, and numerous nieces and nephews. She was preceded in death by her husband Jim, her daughter-in-law Darlene Roe Thurmond, and her granddaughter Beatrice Danielle Thurmond. A memorial service will be held at 2:00 PM on November 1, 2020, in the Chapel of Marietta First Baptist Church. Social distancing and masks are required. A private graveside service will be held prior to the memorial service and is limited to immediate family. Contributions to the “Grateful First” fund of the Marietta First Baptist Church are requested in lieu of flowers. Mayes Ward-Dobbins Funeral Home is handling the arrangements. For those unable to attend the memorial service, a recording will be posted on the Mayes Ward-Dobbins website at www.mayeswarddobbins.com/obituaries/Algen-Thurmond/#!/PhotosVideos.

Algen (Louise) Ayers Thurmond passed away on May 31, 2020, at age 92, to begin her new life with her Lord and Savior. She was born May 1, 1928 in Habersham County, Georgia, where she lived until her marriage to James L. (Jim) Thurmond in 1951. Jim... View Obituary & Service Information

The family of Algen Ayers Thurmond created this Life Tributes page to make it easy to share your memories.

Send flowers to the Thurmond family.