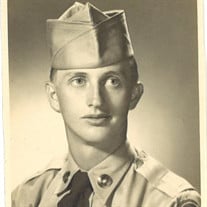 Alvin Lamar Voyles, Sr., 88, of Powder Springs, GA, passed away on December 27, 2020. A Funeral Service will be held at 2:00 PM on Wednesday, December 30, 2020 at Mayes Ward-Dobbins Funeral Home in Powder Springs, GA. An interment at Powder Springs Memorial Gardens will follow the service. Alvin is survived by his loving wife of 67 years, Mary Voyles of Powder Springs, GA., his daughter Vicki Ramos (Ralph) of Calhoun, GA.; son Al Voyles (Dennise) of Dallas, GA., daughter Katherine Brown (Chuck) of Austell, GA.; grandchildren, Brandon Smith I (Kelli), Chasity Russell & her fiancé James Fredrickson, Adam Voyles (Amanda), Ryan Voyles (Melissa), Laura Voyles, Wesley Brown (Leslie) Zachary Brown, Carson Brown, and Madison Brown, great-grandchildren, Charity Smith & her boyfriend Ethan Woodward, Brandon Smith II, Sammy Smith, Auslyn Russell & her fiancé Nathan Patty, Parker Russell, Jaxson Voyles, Anslee Voyles, Kate Voyles, and Paige Brown, as well as many loving nieces and nephews. Alvin was an avid outdoorsman, he enjoyed hunting, fishing, and camping as well as many other outdoor activities. He held an incredibly good work ethic and enjoyed his work. He loved to take care of his lawn and could often be found on his lawnmower which is how he earned his nickname “the lawn mower man”. In his early years he served in United States Army where he fought in the Korean War. Alvin was known to many as Lamar. He had a great love for his family, he was a devoted husband, loving father, and caring grandfather. His loving presence will be missed by many. The family will receive friends for visitation during the hours of 4:00 PM and 7:00 PM on Tuesday, December 29, 2020 and at 1:00 PM on Wednesday, December 30, 2020 at the Funeral Home. Arrangements made under the caring guidance of Mayes Ward-Dobbins Funeral Home www.mayeswarddobbins.com 770-943-1511

Alvin Lamar Voyles, Sr., 88, of Powder Springs, GA, passed away on December 27, 2020. A Funeral Service will be held at 2:00 PM on Wednesday, December 30, 2020 at Mayes Ward-Dobbins Funeral Home in Powder Springs, GA. An interment at Powder... View Obituary & Service Information

The family of Alvin Lamar Voyles, Sr. created this Life Tributes page to make it easy to share your memories.

Send flowers to the Voyles, family.