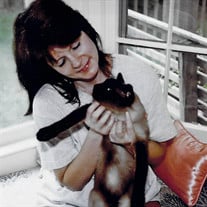 Ann Medford Myers, 59, of Woodstock, Georgia, died Friday, May 5, 2017, after her courageous, hard-fought, six-year battle with breast cancer. A private celebration of her life will be held. Ann loved being outside. She had a deep reverence for plants and animals, especially irises, butterflies, dragonflies, frogs, box turtles and cats (particularly Siamese cats). She was renowned for her "green thumb," providing landscaping and gardening advice to dozens of friends, publishing articles in magazines like Hobby Farm, and educating gardeners and cooks on her blog www.InspiredGardening.com. She was a connoisseur of organic and heirloom vegetables and flowers as well as new introductions to the plant community. Ann was a familiar face at local nurseries that she frequented with her many gardening friends. Her custom-designed garden was both beautiful and productive, filled with delectable organic vegetables and surrounded by beautiful flowers and shrubs. Not only was she a great gardener, but she was expert at converting the garden produce into healthy, tasty meals. Ann was featured in an article entitled "Flora and Fauna" in the Atlanta Journal-Constitution. Also, the Cherokee Tribune's Lifestyle section featured Ann and her garden in article "Fresh from the Garden." Ann also appeared in a TV segment on The Joe Gadener Show with Joe Lamp'l. Ann launched a commercial contract purchasing company (ACI) in 1995. For 20 years, ACI has served as an effective purchasing agent for large international companies as well as for universities, conference centers, country clubs, senior living facilities, state parks, and other U.S. entities. On April 20, 1996, she married Michael M. Myers, who had proposed marriage to her on the top of Half Dome in Yosemite National Park. Ann was preceded in death by her parents, Newton Hamilton Medford, Jr. and Jennie Lyle Medford, and her brother Newt Hamilton Medford III, who owned Marietta Nursery. In addition to her husband, Ann is survived by their two special cats, Blue, a beautiful Siamese, and Sweetie Wildcat, a feral rescue. Mayes Ward-Dobbins Funeral Home in Marietta is handling the arrangements. www.mayeswarddobbins.com 770-428-1511

Ann Medford Myers, 59, of Woodstock, Georgia, died Friday, May 5, 2017, after her courageous, hard-fought, six-year battle with breast cancer. A private celebration of her life will be held. Ann loved being outside. She had a deep reverence... View Obituary & Service Information

The family of Ann Medford Myers created this Life Tributes page to make it easy to share your memories.

Send flowers to the Myers family.