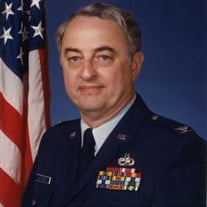 Art was preceded in death by his parents Arthur and Carmen Staden, his first wife Nancy Staden, and second wife Geri Staden. He is survived by his children Maribeth Tegnell and Arthur Staden, Jr., grandchildren Lyndsey Tegnell, Amanda Tegnell McHenry, Emily Staden, and Gabrielle Nguyen, and great grandchildren Keynan Gorby and Eloise Nguyen. Art was born on August 13, 1939 in Collinsville, IL, where he grew up. After receiving a Bachelor of Science degree in aeronautics from Parks Air College, St. Louis University, Art began a distinguished, twenty nine year career as a commissioned officer in the United States Air Force. In addition to assignments in Louisiana, South Carolina, Texas, Illinois, and California, Art also served the US Air Force in Turkey, the Philippines, South Vietnam, Thailand, Japan, and England. Beginning his career as a flight line maintenance officer, he held positions as maintenance supervisor, officer-in-charge of field maintenance, chief of maintenance, maintenance control officer, squadron commander, and group commander. Art achieved the rank of Colonel and the position of Deputy Commander for Maintenance, 6510th Test Wing, Air Force Flight Test Center, Edwards Air Force Base, California. In recognition of his meritorious service, Art was awarded the Legion of Merit, the Bronze Star, the Meritorious Service Medal with two oak leaf clusters, the Air Force Commendation Medal with two oak leaf clusters, and the Republic of Vietnam Gallantry Cross with palm, and other medals. After military service, Art joined Lockheed Martin Aeronautics in Marietta, GA as a test engineer on the F-22 Raptor Advanced Tactical fighter. He began his work with the very first F-22 produced and saw production and delivery through the full production run with the 195th and final Raptor, culminating a twenty year career with Lockheed. Art began his spiritual life with his baptism at St. Peter and Paul Catholic Church in Collinsville, IL. More recently he was a member of The Episcopal Church of the Annunciation in Marietta, GA. Art and his wife Geri attended the University of the South, School of Theology, where they graduated with the Theological Education for Ministry degree. Art was giving of his time, money, and efforts to those he knew and loved, but also to those he didn’t know who were less fortunate than he. He was an active member of the Cobb County Republican Committee. With his wife Geri, he donated thousands of children’s books through the Kiwanis Club of Marietta for distribution to children within the Marietta City School System.

The family of Col. Arthur Lee Staden created this Life Tributes page to make it easy to share your memories.

Art was preceded in death by his parents Arthur and Carmen Staden,...

Send flowers to the Staden family.