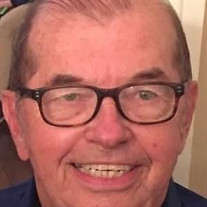 Ashton “Lucky” Gwaltney Elliott, 87, of Acworth passed away on October 23, 2020 at Wellstar Kennestone Hospital in Marietta. He was born on July 10, 1933 in Hampton, VA to Graydon Lee Elliott and Edna (Gwaltney) Elliott. In addition to his parents, he was preceded in death by his wife Delores “Dee” Ann (West) Elliott. Lucky was a graduate of Hampton High School and earned a BA in Business from the University of Richmond. He retired from Roadway Express after 27 years in management and then in retirement worked as a part-time service driver for Enterprise Car Rental for over 20 years. A devout Christian, Lucky’s faith served as the foundation for his life. He was a member of Eastside Baptist Church of Marietta, where he was active in Sunday school and enjoyed hosting an annual breakfast for his class for over two decades. Lucky was an avid tennis player and enjoyed following a number of sports, including college basketball, football, and the Atlanta Braves. He also found joy in traveling throughout the U.S. and North America. More than anything, Lucky loved spending time with his family. He was the devoted patriarch “Poppy” to the Elliott family and was the cornerstone of every family event. Everyone who knew him considered themselves lucky to know him; he will be greatly missed. Lucky is survived by his brother, Graydon A. Elliott of Williamsburg, VA; his three children, A. David Elliott of Arlington Heights, IL, Rick G. Elliott and his wife Jennifer Elliott of Cartersville, and Beth (Elliott) Burden and her husband Russ Burden of Birmingham, AL; his five grandchildren Jennifer (Elliott) Warren and her husband Bryan Warren of Duluth, LeeAnn Elliott and her husband Matt Kubilus of Tampa, FL, Rick A. Elliott and his wife Lauren Elliott of Decatur, Michael Elliott of Austin, TX, and Sarah Burden of Birmingham, AL; his two great-grandchildren Hadleigh and Amelia Warren; and his best friend and companion for almost 30 years, Nancy Koson of Acworth. A visitation will be held at Mayes Ward Dobbins Historic Marietta Chapel on Tuesday, October 27, 2020 from 2 to 4pm. Burial will be in Hampton, Virginia. www.mayeswarddobbins.com 770 428-1511

Ashton &#8220;Lucky&#8221; Gwaltney Elliott, 87, of Acworth passed away on October 23, 2020 at Wellstar Kennestone Hospital in Marietta. He was born on July 10, 1933 in Hampton, VA to Graydon Lee Elliott and Edna (Gwaltney) Elliott. In addition... View Obituary & Service Information

The family of Ashton Gwaltney Elliott created this Life Tributes page to make it easy to share your memories.

Ashton “Lucky” Gwaltney Elliott, 87, of Acworth passed away on...

Send flowers to the Elliott family.