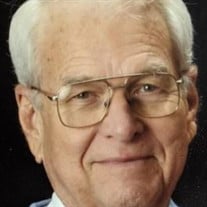 Ben Keith Wilbanks, Jr. 86, born November 10, 1934 to Ben Keith Wilbanks, Sr. and Thelma White Wilbanks, passed away peacefully Friday, July 16, 2021. He was born and raised in Chatsworth, Ga. After graduating high school, he attended North Georgia College. Ben proudly served in the United States Air Force from 1958-1964. On September 20, 1959 he married the love of his life Charlene Storey from Griffin, Ga. They soon welcomed their son Keith (Happy) and daughter Karin into their lives. For most of his professional life Ben was employed by Combined Insurance Company as a Sales Administrator. After a successful career with Combined, he left to pursue franchise ownership with Baskin Robbins, operating 2 profitable locations in Marietta, Ga. for several years. During this time, he and Charlene fulfilled a longtime dream of Ben’s to purchase an Airstream Trailer. Their travels in the trailer took them from coast to coast, visiting nearly every state and Canada too. His retirement in 1986 allowed them to become full-time travelers, enjoying the freedom to go as far as they wanted for as long as they wished. In addition to traveling in the Airstream, he loved “cruising” the Caribbean and the Mediterranean Seas, vintage cars, reading, and military movies. However, nothing brought Ben more joy than spending time with his family, especially his grandsons. Ben was a loving and generous husband, father, grandfather, brother, and friend. A true Southern Gentleman whose kindness, integrity, and sense of humor will be greatly missed by all who knew him. His strength, courage, and optimism inspired many who knew the challenges he faced. He was preceded in death by his parents Ben and Thelma Wilbanks. He is survived by his cherished wife of 61 years Charlene, son Keith and wife Denise, daughter Karin Wilbanks Westphal and husband Keith and their sons Owen, Evan, and Alek all of Marietta. He is also survived by his sister, Barbara Anne (B.A.) Wilbanks of Chatsworth, GA. Visitation is scheduled for Sunday August 1, from 3:00-5:00 p.m. at the Wilbanks’ home at 2331 Ventana Crossing Marietta, GA 30062. Ben’s memorial service will be held on Tuesday August 3, at 9:30 a.m. at Georgia National Cemetery located at 1080 Scott Hudgens Dr. Canton, Ga. 30114. In lieu of flowers, donations can be made to Marietta First United Methodist Church.

The family of Ben Keith Wilbanks Jr. created this Life Tributes page to make it easy to share your memories.

Send flowers to the Wilbanks family.