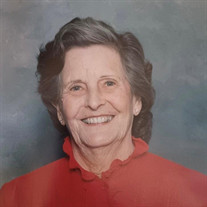 Pat was born July 4, 1929 to William and Rittie Kilpatrick in Choctaw County (Ackerman) Mississippi. She graduated from Mississippi State College for Woman (‘ The W’) in Columbus, Mississippi with a degree in English. Pat married Air Force 2nd Lt. Stancil O. Wise and began her ‘career’ as an Air Force wife, calling nine states and one foreign country home in twenty years. In addition to giving birth to four children in five years (in four different states), she ran the show for every move; decluttering and organizing before it was popular and traveling by car with four young children from state to state. In anticipation of her husband’s retirement, they returned to Marietta, Ga in 1964 to build their forever dream home. During this time she worked at the Research Lab at Lockheed as an executive secretary. Pat was a member for years at First Baptist Church of Marietta before transferring to Roswell Street Baptist Church. Grandmommy to her grands and great grands, she was the consummate cook, baker, and gardener. For years, Sunday dinner for the family was either the southern staple of fried chicken with rice and gravy or roast beef with green beans grown and canned by Pat. She will forever be remembered for her pecan pie, german chocolate cake, coconut cake and light as a feather biscuits made by “dumping” the ingredients in a pile on the counter and mixing them up. She was predeceased by her husband of fifty years, Major Stancil O Wise Sr., her parents, and her brother, John Kilpatrick. Pat is survived by her children, Stancil Wise Jr. (Denise), Dr. Vanice Roberts (Michael), Keith Wise (Michelle), Wynn McCurdy (Steve), nine grandchildren and thirteen great grandchildren. The service will be at Mayes Ward Friday February 25th at 11:00 a.m. Dr. Nelson Price officiating,and visitation starting at 10:00. Interment will be at Enon Cumberland Presbyterian Cemetery in Ackerman, Mississippi at 11:00 a.m., Saturday the 26th. Family and friends will be received at 10:00 a.m. at Coleman Funeral Home. In lieu of flowers a donation to the food pantry at the Mississippi University for Women (MUW) would be appreciated by the family. (https://longblueline.muw.edu/give) or ( MUW Foundation 1100 College Street – MUW 1618 Columbus, MS 39701-5800)

Pat was born July 4, 1929 to William and Rittie Kilpatrick in Choctaw County (Ackerman) Mississippi. She graduated from Mississippi State College for Woman (&#8216; The W&#8217;) in Columbus, Mississippi with a degree in English. Pat married... View Obituary & Service Information

The family of Bernice 'Pat' Kilpatrick Wise created this Life Tributes page to make it easy to share your memories.

Send flowers to the Wise family.