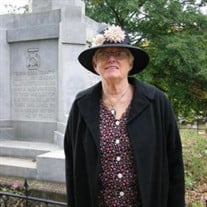 Former Marietta City Councilwoman Betty Lou Smith Hunter, 83, died peacefully at her home in Marietta Wednesday. Hunter served on the Marietta City Council for 24 years, from 1982 to 2005. Her tenure is the second-longest in Marietta history. Former Councilman Philip Goldstein, who served with her, reminisced Wednesday on Hunter’s efforts to make Marietta a better place. It was Hunter who helped restore the city’s Manget neighborhood, a place plagued with crime and other challenges, Goldstein said. After bringing it to the council’s attention, she was able to see that community revitalized. Hunter asked to hold a council meeting on-site in the neighborhood so the other council members could see how bad it was. “It was a problem area, and she was responsible for beginning that change,” Goldstein said. “She mothered that situation, and her efforts were a turning point for that area.” Hunter is also the reason the Marietta Fire Department is now home to the Fire Museum on Haynes Street. Hunter wanted to preserve historical Marietta artifacts relating to the fire department, so she helped get funding through bonds for the project. To Goldstein, Hunter was a true public servant who loved her city and was always looking to help. “She loved the city with all of her heart,” he said. “She cared about people immensely, and she was a pleasure to work with.” In addition to serving on the council, Hunter was president of the Marietta Confederate Cemetery Foundation, the group charged with maintaining the cemetery. “I think it is important because it makes people realize that these men were fighting not necessarily for slavery but most of the men were fighting to protect their homes,” Hunter said in a 2014 interview. “They were made to go to war, a lot of them. It makes people realize that there is some value to these soldiers here, is what I think.” During her time as president of the foundation, she worked with historian Brad Quinlin to discover the names of 350 “unknown” soldiers buried in the cemetery. New walls were added inside the cemetery so that the discovered names could be engraved and immortalized. Several war reenactments have been held at the cemetery, and Hunter took great pride in playing the role of Lucinda Hardage, a young woman who survived the war and lived well into the 1930s. “This is our heritage, and people need to know about it, whether it be Northern or Southern,” Hunter said in 2014. Next to the cemetery is Brown Park, whose gazebo was named after her in 2013 in a resolution presented by Mayor Steve Tumlin. The gazebo, initially on Marietta Square, had been in storage, according to the resolution, but was moved to the park and named after her in honor of her preservation efforts. Another historical landmark in Marietta, the Marietta Museum of History, owes its existence, at least in part, to Hunter. Museum founder Dan Cox said Kennesaw House, then an empty building off Marietta Square that had served as a hotel during the Civil War, would make a great place to display community treasures. Hunter, a Marietta council member at the time, took the idea to then-Mayor Joe Mack Wilson. Wilson, in turn, convinced the Downtown Marietta Development Authority to purchase the building. “Joe Mack got it done right away,” Cox recalled in 2016, “and they called and said, ‘We got the building. You got a job.’” Hunter’s niece Melanie Dobbins, chief operating officer and marketing director at Insider Advantage, said Hunter was a leader in the Cobb community and an “influencer.” “She made a great impact on tons of people in the city,” Dobbins said Wednesday. “She was an inspiration and an influencer. She made you want to discover things and learn about your community.” Hunter was preceded in death by her husband, Randall Earnest Hunter, Sr., and her parents, B.T. and Winona Cook Smith. She is survived by her three sons, Randy Hunter (Donna), of Woodstock; Robert Hunter (Ronda), of Bellefontaine, Ohio; Russell Hunter (Donna), of Marietta; grandchildren Devin Lloyd Hunter, Ivan Lawless Hunter (Sarah), Kaitlin Star Hunter, William Dylan Krenz, Erin Nicole Krenz, Santana Philip and Michael Briele; great grandchildren, Tommy Buck Hunter, Riley Dean Hunter, Gavin Ellis Krenz and Brielle Ray Williams; sister Susan Smith Dobbins (Jackie), of Murphy, North Carolina; stepsister, Dana Hughes Henderson, of Atlanta; several nieces, nephews and cousins; and her beloved cats Misty and Smokey. The family will receive friends from 2—4 p.m. and 6—8 p.m. Friday at Mayes Ward-Dobbins Funeral Home at 180 Church Street in Marietta. Funeral services will be at 11 a.m. Saturday, April 9, at Mayes Ward-Dobbins Funeral Home in Marietta, with Rev. James Parham and Rev. Eddie Thackston officiating. Hunter will be buried next to her husband Randall Earnest Hunter, Sr. at Oak Grove Cemetery in Morganton, Georgia. In lieu of flowers, the family asks for donations to Gospel Light Community Church, P.O. Box 6452, Marietta, GA 30065.

The family of Betty Lou Smith Hunter created this Life Tributes page to make it easy to share your memories.

Send flowers to the Hunter family.