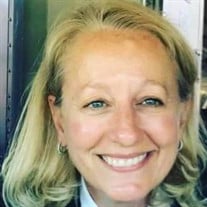 Bridget was born in Shawano, WI on June 25, 1959 to Mary Breneman and Douglas Burris. She attended Shawano City Schools and graduated from Shawano High School in 1977. It has been said that back in the day, she was the disco queen at the best(only) disco in Shawano. She married Rick Matarrese in Atlanta, Georgia in 1989 and they had one child, Kristina (Tina) Marie Matarrese in 1990. In time, Bridget and Rick divorced, but remained united in the parenting of their daughter. Bridget had many jobs in her life: monorail driver at Disney, administrative assistant, bed and breakfast owner. But at the age of 40, she realized her childhood dream of becoming a pilot. She began her career at Gulfstream International Airlines and joined Endeavor in 2004 where she moved up the ranks to become a Captain. Bridget was a tenacious, steadfast and dedicated Air Line Pilots Association volunteer. She tirelessly worked on behalf of her fellow pilots, but most of all, she just loved to fly. The best job of her life, the greatest joy of her life, was being the mother of Tina. They were the best of travelling companions and traveled all over the world. Her favorite place to go was Paris. She and Tina enjoyed cooking together often, and their annual Christmas cookies were enjoyed by all their friends and coworkers. It is with Tina that the longest and best memories of Bridget will reside. She spent countless hours researching and building her family tree. She played tennis as often as as she could. And whether it was penny poker or bridge, she was always up for a game of cards. Bridget will continue caring for others even after death. She has been able to donate her organs and save lives. United with Tina in their grief at the the loss of daughter and sister are her parents Mary and Chet Ladd, father Douglas Burris, brothers Jeffery Burris and Richard Burris, and sister, Anne Burris Moffatt and their spouses. A large family of aunts, uncles, and cousins will also miss her in their lives. Bridget is predeceased by her step-mother, Beverly Burris, her greatly loved second mom. Also preceding her were her brother Michael Burris, brother David Burris, and sister Christy Burris, as well as grandparents. Contributions can be made in loving memory of Bridget to St. Jude Childrens Hospital.

Bridget was born in Shawano, WI on June 25, 1959 to Mary Breneman and Douglas Burris. She attended Shawano City Schools and graduated from Shawano High School in 1977. It has been said that back in the day, she was the disco queen at the best(only)... View Obituary & Service Information

The family of Bridget Matarrese created this Life Tributes page to make it easy to share your memories.

Send flowers to the Matarrese family.