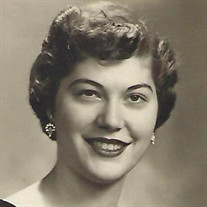 Carole Sue Lowman, 86, of Marietta, Georgia, passed away peacefully, in her sleep, at her Marietta home on November 04, 2021, just 26 days from her 87th birthday. Carole was born on November 30th, 1934 to Ralph and Cecelia Knoebber in Cincinnati, Ohio. Her sister Marilyn Cecelia followed a year and a half later on April 14,1936, thereby completing their family. After graduating from Good Shepherd Catholic High School in Frankfort, Kentucky, at the age of 17 in May of 1952, Carole took a temporary position with the State of Kentucky’s Highway Department, Division of Planning as a Vari-typist. Upon her 18th birthday later that year, her position became permanent. In October of 1953, she met her future husband, James Kenneth Lowman, a Lieutenant in the United States Air Force and native of Frankfort, Kentucky. She met him on a blind date set up by both her sister, Marilyn and Ken’s brother, Douglas, who were the “other couple”. Seeing her for the first time, he recounts how incredibly beautiful she was and that his heart literally “jumped”. He wondered how this good fortune fell to him. He was immediately smitten, as was she. They were engaged by Christmas. Eight months after that they were married, on August 7, 1954. And at the age of 19, a lifetime adventure began as the wife of an Air Force officer. They immediately started their family and by May of 1955, they were blessed with their first of five daughters, Lynne Ann, in Smyrna, Tennessee. Amidst the continual relocations common in the military, their family grew in August of 1956 with Deborah Carole born in Frankfort, Kentucky, while Ken awaited her to join him in Neubiberg AB, Germany. Dianne Marie followed in November of 1957, born in the military hospital in Munich, Germany. And then more moves and a return stateside where Patricia Gail entered the world in Harrisburg, Pennsylvania. With four kids in tow, she continued to make homes in Great Falls, Montana, Grand Forks, North Dakota, Dallas, Texas, and a return to her home town of Frankfort Kentucky to wait out the unnerving deployment of her husband, Ken, to Vietnam. Upon their happy reunion from his deployment, their final daughter, Mary Beth joined them in yet another home made in Dayton, Ohio. And finally upon Ken’s retirement, after 30 years of service, his private sector work took them to Marietta, Georgia, the one place that they have spent the most of their lives. They watched their family grow and multiply from “below the snow-belt”, as Ken likes to say. Throughout all of this, Carole was a good neighbor. She’d loved getting to know those who lived around her and was always there to help in anyway she could. Be it babysitting, snow removal, advice or recipes, she was always willing to help. She had a gift in establishing herself, wherever she might live. Carole enjoyed crafts and was quite an accomplished seamstress. She often made clothes for her children, doing work as fine and difficult as making suits and homecoming dresses. She liked her crafts too. Her passion for this no doubt started on bases throughout Europe and the U.S. at the classes offered to her, with free child care - a bonus and necessary respite from the demands of her growing family. Her abilities grew and culminated in some amazing pieces of stained glasswork. She filled all 19 homes she made with love and kindness. She was a stay-at-home mom and her family was the richer for it. Good smells always emanated from the kitchen and her homes were warm, happy and wonderful places to be. Carole and Ken always stressed that family came first and and their daughters have embraced their teachings. She was a fierce mama- bear. Carole was predeceased by her mother and father, Cecelia and Ralph, her beloved brother in-laws, Arthur Colt and Douglas Lowman, sister in-law Kathleen Lowman LaFontaine and son in-law Terry Stueve. She is survived by her devoted and loving husband James Kenneth, and her daughters and spouses, Lynne and David Bowman, Deborah Stueve, Dianne and Pat Verbeek and their children Kyle, with spouse Cassie and son Nolan, Stephanie and her fiancé Mark Kerney, Kendall Lynch and her husband Kyle, Haley and Georgeanne Verbeek, Gail Terry and her children Sarah Maslowski with husband Tom, and Emily McMichael, and Beth and Jim Martin and their children Madison and Carson, whom, to her unending delight, she helped raise. She will be missed greatly by all, as she was the selfless glue and the example for what it meant to be “family”.

Carole Sue Lowman, 86, of Marietta, Georgia, passed away peacefully, in her sleep, at her Marietta home on November 04, 2021, just 26 days from her 87th birthday. Carole was born on November 30th, 1934 to Ralph and Cecelia Knoebber in Cincinnati,... View Obituary & Service Information

The family of Carole Sue Lowman created this Life Tributes page to make it easy to share your memories.

Send flowers to the Lowman family.