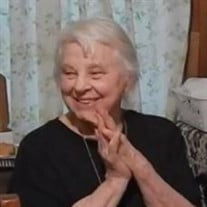 Annie Catherine “Cat” Pavlovsky Black, of Marietta passed away on Friday, April 9, 2021 at the age of 90. A funeral Service will be held at 2:00 p.m. on Sunday, April 18th at First Baptist Church Chapel in Marietta, GA. The family will be receiving friends from 4:00 p.m.- 6:00 p.m. on Saturday, April 17th at Mayes Ward-Dobbins Funeral Home 180 Church St. Marietta. Following the funeral service, she will be buried at Mountain View Cemetery. Cat was preceded in death by her husband, Herbert “Herb” K. Black, Sr., and is survived by her children, son, Herbert Keith Black, Jr; daughters, Patricia “Pat” Black Photianos and her husband Christ T. Photianos, Alexandria “Alex” Black; grandson, Stephen Christopher Photianos; great-grandchildren, Aurora, Madelyn, Veronica, and John Photianos. She is also survived by several nieces, nephews and extended family. Cat was a long-time resident of Marietta, GA. She was saved at age 14 and joined First Baptist Church of Marietta where she became a longtime member. She graduated from Marietta High School in 1948 and kept involved with the alumni for years. She served in the Airforce briefly during Korean War. She worked at Lockheed running the medical department in her earlier life. Later on, she was an office manager and corporation officer for Black Realty & Development, Inc. Later in life, she spent much of her time comforting those who were ill, had ill ones or deceased love one. She gave away crosses and angels to those she felt needed to know God was near by and watching over them. She spent much of her life caring for the poor and delivering meals. She retired from Cobb County Juvenile Court where she worked to put broken family back together.

The family of Catherine Pavlovsky Black created this Life Tributes page to make it easy to share your memories.

Send flowers to the Black family.