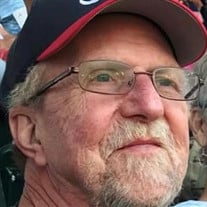 Charles Franklin Corn, 71, of Kennesaw, GA, passed into his Heavenly Home Sunday morning, January 31, 2021. A memorial service will be held at 11:00 AM Thursday, February 4, 2021 at Mayes Ward-Dobbins Funeral Home in Powder Springs, GA, with Mr. Terry Cantrell officiating. Live stream will be available. Charles is survived by his wife of 36 years, Frani Corn; his daughter Molly Francine Heard (Chuck) of Dallas, GA; sister, Mary Corn Johnson (Frank Wesley) of Houston, TX; aunt, Jeanette Melton (Buck) of Smyrna, GA; several nieces, nephews, and cousins. Charles was pre-deceased by his parents Bill and Gladys Corn of Marietta, GA. Charles was born in Cleveland, OH on December 21, 1949. He moved with his family to Marietta, GA and graduated from Sprayberry High School. He then went on to serve in the US Army from August 1969 to March 1972 (stationed in Germany; Military Police). After marrying Frani in 1985, Charles earned an associate degree in Pastoral Ministry from the New Orleans Baptist Theological Seminary. He served as a pastor in the home mission field (Lithonia, GA) and at the Clay Home (Marietta, GA). Charles retired from the US Postal Service (January, 2012) after 15 years of service as a mail carrier. Charles LOVED music, particularly classic rock and jazz. He was also an avid fan of baseball (Cleveland Indians, New York Mets, and Atlanta Braves). He was an athlete himself and enjoyed playing on both baseball and softball teams as first baseman and/or pitcher. Charles enjoyed being outdoors, observing nature, and vacationing at the beach. Charles was a faithful Christian and enjoyed introducing people to Jesus. He and Frani served in many local churches. Charles was well-loved and had a winning personality with a wonderful sense of humor. His daughter Molly was the apple of his eye. The family will receive friends at the funeral home from 3:00 PM – 5:00 PM on Wednesday. Arrangements made under the caring guidance of Mayes Ward-Dobbins Funeral Home and Crematory Macland Chapel in Powder Springs (770)943-1511 www.mayeswarddobbins.com

The family of Charles Franklin Corn created this Life Tributes page to make it easy to share your memories.

Charles Franklin Corn, 71, of Kennesaw, GA, passed into his Heavenly...

Send flowers to the Corn family.