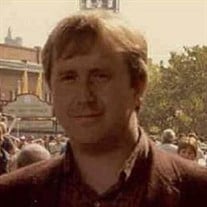 GENTRY, Charles B. Charles Baggett Gentry, aged 66, passed away at his home in Atlanta on August 17, 2020, after struggling valiantly with chronic medical problems in recent years. He had retired in 2015 from a 37-year career with the Internal Revenue Service, Atlanta Territory, in the information technology area. During his career at the IRS, he received numerous commendations for his outstanding contributions, including as a troubleshooter for high-priority computer issues. Gifted intellectually, he continued learning all his life, teaching himself both German and Hebrew after college. His love of mathematics was accompanied by a life-long love of music, which was manifested in his study of the piano and in his involvement with the North Fulton High School Special Choir and the University of Virginia (Class of 1975) Glee Club. In both high school and college, he traveled abroad to perform choral music, with the highlight being his participation in the 1969 World Tour of the North Fulton Special Choir led by Robert S. Lowrance, Jr. Devoted to his extended family, he kept in touch with many cousins and was an avid genealogist. Charles was born on September 25, 1953, in Atlanta to Edgar Crawford Gentry and Joyce Baggett Gentry. He is survived by his sister Celestea “Cissie” Sharp; his three brothers, Edgar (Celia), William (Sherry), and John (Anne); three nieces (Diana Gentry, Amanda Hinson, and Elizabeth Gentry); and two nephews (Carl Gentry and Will Gentry), as well as a number of well-loved cousins. A private graveside service will take place at Northview Cemetery in Dublin, Georgia. A public memorial service will be held at a later date in Atlanta.

GENTRY, Charles B. Charles Baggett Gentry, aged 66, passed away at his home in Atlanta on August 17, 2020, after struggling valiantly with chronic medical problems in recent years. He had retired in 2015 from a 37-year career with the Internal... View Obituary & Service Information

The family of Charles Baggett Gentry created this Life Tributes page to make it easy to share your memories.

Send flowers to the Gentry family.