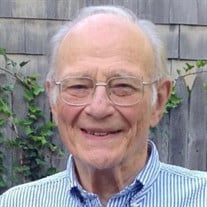 Charles Edgar Gunnels Jr., 95, died peacefully on January 15, 2022 in Marietta, Georgia surrounded by his family. He was born on February 8, 1926 to Charles and Mildred Gunnels in Griffin, Georgia. He spent his youth in the East Lake neighborhood of Atlanta and loved spending summers working on his grandfather’s peach farm in Griffin or at his parents’ lake cabin in Highlands, North Carolina. He attended Boys High before enrolling at Georgia Tech in 1944 to study architecture. His studies were interrupted when he enlisted in the Army Air Corps in September 1945. He served in Germany and Italy as a radio tower operator, and it was during his service overseas that he began corresponding with Geraldine “Gerry” Bell due to a fated piece of misdirected mail intended for one of his fellow soldiers. Charles returned from his military service in the spring of 1948 and went immediately to Hartford, Connecticut to meet the woman with whom he had been corresponding. The two fell quickly in love and were married on December 19, 1948 in Atlanta. As they settled into married life, Charles resumed his studies at Georgia Tech and earned his undergraduate degree in 1951 followed by an architecture degree in 1952. He began his architectural career in Connecticut working with Warren Ashley, and after a brief stint with the Tennessee Valley Authority in Knoxville, Charles and Gerry and their two young sons moved to Walnut Creek, CA in 1957 when Charles took a job with Kaiser Aluminum. His work with the company would later bring the family to Wilmette, Illinois and finally back to Connecticut in 1966. In 1968, Charles joined two of his former colleagues from Warren Ashley who had formed their own architectural firm, and the family moved into their treasured home on Plymouth Road in West Hartford, where Charles and Gerry lived until 2017. Charles excelled in his career with Russell Gibson von Dohlen and served as principal architect on many notable projects throughout New England, including Gampel Pavilion on the University of Connecticut campus in Storrs. He was later named a vice president at the firm, a role he held until his retirement in 1991. Though he was an accomplished multi-sport athlete as a young man, in his adult life his interests turned to more artistic pursuits including drawing, painting, needlepoint, and most especially to woodworking. From the early days of his adult life, Charles began creating beautiful artwork, fine furniture, and wooden toys, which eventually filled not only his own home, but the homes of many family and friends to whom he gifted his work through the decades. In his retirement, he enjoyed working in his woodshop, doing crossword puzzles, and traveling with Gerry to Vermont, Switzerland, and elsewhere. Charles was a devoted husband and a loving father, grandfather, and great-grandfather. He loved animals and children and giving them all affectionate nicknames. Charles and Gerry enjoyed their friendships with neighbors on Plymouth Road, and were especially fond of the Porter and Geerlings families. They also cherished their long friendship with Jurg and Sibylle Keller of Switzerland, who they considered to be part of their extended family. Although he left Georgia in his early adulthood, Charles never lost his southern charm. He was always warm, kind, generous, quick-witted, and gracious. To know him was to love him. As his memory began to fade in the last years of his life, his most often-repeated refrain to his family was, “You don’t know how much I love you.” Except, of course, we all did. His greatest legacy was his unconditional love. Charles returned to the Atlanta area in the final months of his life and will be laid to rest alongside his beloved wife Gerry in the Georgia National Cemetery. He will be deeply missed by his sons Bob and Marc and daughter-in-law Kaki, his grandchildren Laura (Adam) Aikens, Jennifer, and Brandon (Laura), his great-grandchildren Caroline, Charlie, and Sam Aikens and Bennett, Lyla, and Baylor, and his nieces and nephew Nan Larsen, Karen Deakins, and John Bell. He was predeceased by his parents, his wife Gerry, his son Brandon Charles, and his sister and brother-in-law Anne and John Bell. The family wishes to thank the memory care staff at the two excellent facilities where he spent his final years: Maplewood at Danbury, Connecticut (special thanks to Patty DiDomenico for her loving care) and Camellia Place in Woodstock, Georgia.

Charles Edgar Gunnels Jr., 95, died peacefully on January 15, 2022 in Marietta, Georgia surrounded by his family. He was born on February 8, 1926 to Charles and Mildred Gunnels in Griffin, Georgia. He spent his youth in the East Lake neighborhood... View Obituary & Service Information

The family of Charles E Gunnels Jr. created this Life Tributes page to make it easy to share your memories.

Send flowers to the Gunnels family.