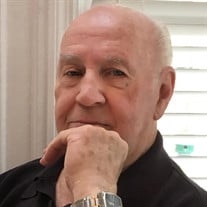 Charles H Nystrom On May 25, 2021, Charles Henry “Chuck” Nystrom, passed away from cancer at home with his wife and children at his side. Chuck was born July 17th, 1933, in Chicago, Illinois. In his late teens, he met the love of his life, Elsa Hohenstein at Notre Dame HS in Chicago. In 1953, he enlisted in the Air Force during the Korean War. Chuck and Elsa were married in 1954 after he completed training in upstate New York and San Marcos TX. The newlyweds traveled from Chicago to Riverside CA via “historic” Route 66 on their honeymoon. However, after 3 months in California, Chuck was sent to Greenland. The year he spent there, gave him a life-long hatred of cold weather. Elsa spent that year in Chicago where their first child, Carol, was born at Great Lakes Naval Training Center. After serving 4 years in the Air Force, Chuck and Elsa returned to Illinois to raise their growing family. Chuck began his career as a draftsman in Chicago. Using his artistic talent, he developed additional skills in design and photography that inspired him to open his own graphic arts studio, Comm-Tech Art. Clients praised him for his passion for detail and the precision and accuracy he brought to his designs. After a few years living in a city apartment, Chuck and Elsa moved to Cary IL, where their children grew up in a traditional small town. After one frigid Chicago winter too many, Chuck and Elsa decided to move South to a warmer place and settled in Marietta, Georgia where he could indulge his love of boating year around. Chuck was a true Renaissance man, able to tackle any project, but woodworking and home improvement were his true passions. Neighbors were aware of his skills and often asked his advice on a variety of projects. After their children were grown, Chuck and Elsa spent their summers traveling in his pride and joy, a 40 ft motorhome. They visited all but one of the 50 states, (Hawaii) because the motorhome did not float. In Chuck, the world lost a great one. He was one hell of a guy. There are no words for how much he will be missed by family and friends alike. He was preceded in death by his daughter, Vida, and is survived by Elsa, his wife of 67 years, and their children, Carol, Robin ( Craig), Jeff, Lisa, John.( Tina), and Justin ( Jessie), along with their seven grandchildren, Max, Mallory, Katie, Sharon, Nina, Virgil, and Henry. A Funeral Mass will be held at St. Peter Chanel Catholic Church on Friday, June 18th at 1:30 p.m. The service will be livestreamed, please see details below. Following the service, you are invited to the family's home for a reception. Memory Book online at Mayes-Ward-Dobbins Funeral Home. In lieu of flowers, if you choose to honor Chuck’s memory, please send a donation in his name to the charily of your choice. Livestream Links: SPC website livestream page: https://stpeterchanel.org/worship/live-stream (includes helpful hints for viewing the live stream on TVs). St. Peter Chanel Catholic Church YouTube Channel: https://youtube.com/StPeterChanelCatholicChurch Direct Link to the funeral’s livestream: https://youtu.be/ZpKSFIMWw98

The family of Charles H. Nystrom created this Life Tributes page to make it easy to share your memories.

Send flowers to the Nystrom family.