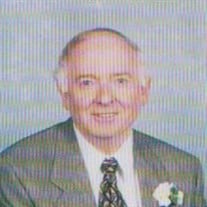 Charles B. Parris (88) formerly of Woodstock, GA, passed away peacefully on Saturday, October 16, 2021 at his assisted living facility in Canton, GA. The funeral service will be held this Thursday, October 21, at 11:00 am at Mayes Ward-Dobbins Funeral Home in Marietta, with visitation one hour prior to the service. Rev. Danny Parris and Rev. Gary Parris will officiate. Rev. Joe Buckner will provide the music. Burial at the Georgia National Cemetery will be held at a later date. Charles was born on April 10, 1933 in McCaysville, GA, where he grew up. After graduation from high school, he joined the Air Force and was stationed in Pusan (now Busan), Korea toward the end of the Korean War. Upon leaving he was given a plaque (in English & Korean) thanking him for the work he did with the orphans in that city. He returned to the states and went to work with Armour & Company, one of the leading meat packing companies in the US. He retired after 40 years of service in various positions, the last being region sales manager. He was involved in many civic organizations in the cities where he lived. Charles never met a stranger, and was very gracious in his opinions of others, most often saying, “He (or She’s) a fine man (lady)!” He loved people and animals and they sensed it. He had a dry sense of humorand loved needling people! Charles never married or had children, so his family and friends were very important to him. Charles accepted Jesus as a child and was a member of Baptist churches in the cities where he lived. He most currently, was a member of Roswell Street Baptist in Marietta, GA, joining in 1989, and was a member of the Singles 2 Life Group until his health prohibited him from attending. He was on the team of Greeters. Charles is preceded in death by his parents, Bunyan G. Parris and Pauline Pope Parris; sisters, Marjorie Woodward (Charles Ray), McCaysville, GA, and Norma Lee Fair (Tom), Loveland, OH; and niece, Michelle Parris Strickland (Tim), Orange Beach, AL. He is survived by special friend, Betty McCoy; brothers, Rev. Danny Parris (Regina), Foley, AL, Jack Parris (Janice), Ringgold, GA, Rev. Gary Parris (Faye), Blairsville, GA; and numerous nieces, nephews, and a host of friends. In lieu of flowers, memorial donations may be made to The Gideons International. https://www.sendtheword.org/

Charles B. Parris (88) formerly of Woodstock, GA, passed away peacefully on Saturday, October 16, 2021 at his assisted living facility in Canton, GA. The funeral service will be held this Thursday, October 21, at 11:00 am at Mayes Ward-Dobbins... View Obituary & Service Information

The family of Charles B. Parris created this Life Tributes page to make it easy to share your memories.

Charles B. Parris (88) formerly of Woodstock, GA, passed away...

Send flowers to the Parris family.