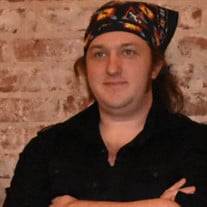 Chris was born at Seaway Hospital in Trenton, Michigan on February 13, 1980 and went to be with the Lord on April 23, 2021 at the age of 41. He was survived by his wife; Amy Lynn Fall, mother; Sara Littlefield, step-father; Jerry Littlefield, father-in-law; Charles Jeffery Hodges, mother-in-law; Sharon Ruth Hodges, brother-in-law; Scott Jeffery Hodges, sister, brother-in-law, and two nieces; April, Neil, Emerald Rose, and Violet McClellan. Chris was a man who loved the Lord with all his heart and loved people. He loved to listen to people and put so much of his heart and mind into understanding them. He was a great councilor to many friends and seemed to know people better than they knew themselves. He was so insightful he could predict what type of soda a stranger would pick before they went to the fountain at self-serve restaurants. That was one of his favorite games to play and it was uncanny how often he was right. He was very straightforward with the people who were closest to him. If there was some sort of issue it was going to be discussed. There was no eye-rolling or smirk that was dismissed. He expressed himself best through his art. As a drummer he created the heartbeat of the music and gave each song it’s unique personality. A lesser known fact is that his knack for rhythm made him an excellent dancer too but only in the privacy of his home with his wife. He loved his wife and was an excellent husband. His visual art was a blend of drawing, painting and his favorite medium was 3D animation. His characters and style were unique to him alone. His subject matter mostly revolved around apocalyptic theology and bible stories but not they way it was told in Sunday school. He had the heart of Elijah and wanted everyone to be ready for the Lord. If you knew him for more than an hour the subject most likely came up. In the end Chris didn’t want to die yet but he was not afraid. He fought to the end and has won. His life is one the Lord is proud of and he is finally at peace. We look forward to seeing the amazing art he’ll produce in heaven when we all give glory to the Lord. Until then come see some of his art and hear his music at his memorial service May 16, 2021 at Stonebridge Church 675 Tower Rd. Marietta, GA 30060 at 8pm followed by a time of fellowship.

Chris was born at Seaway Hospital in Trenton, Michigan on February 13, 1980 and went to be with the Lord on April 23, 2021 at the age of 41. He was survived by his wife; Amy Lynn Fall, mother; Sara Littlefield, step-father; Jerry Littlefield,... View Obituary & Service Information

The family of Christopher Robert Fall created this Life Tributes page to make it easy to share your memories.

Chris was born at Seaway Hospital in Trenton, Michigan on February...

Send flowers to the Fall family.