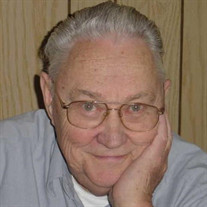 Clarence W McCollum was born to Tom McCollum and Ethel Matthews McCollum in Kennesaw (West Cobb), Georgia. He was the second of five children who were raised in West Cobb. Clarence passed peacefully from this life in the early morning of June 7, 2021, at the age of 92. Clarence grew up on a farm in West Cobb County, Georgia. He lived a life of love and family. Clarence graduated from McEachern High in 1946 where he was Senior Class President. He proudly served his county in the Army during the Korean War. Clarence went on to graduate from Massey Law. He retired from Lockheed after 41 years. Clarence continued to serve the community as a member of the Marietta and Powder Springs Lion Club (30 years), as a member of the Red Rock Community Club (30 years), and as President for the Cobb County Farm Bureau (15 years). He worked hard and served his family, community and employers with integrity. Clarence enjoyed reading, solving cryptograms, driving, humming a good tune, fixing electronics, and watching the Georgia Tech Yellow Jackets play football. As a child, Clarence attended New Salem Baptist Church. He lived and taught those principles to his children. He loved to talk, but the greatest messages were delivered in the way he lived. Clarence demonstrated the importance of love for our families and the ability to continually increase in love, gentleness, and acceptance. Mostly, he enjoyed being surrounded by family and friends and reminiscing about all the fabulous memories created throughout his life. Clarence put family first and created meaningful relationships with his children and grandchildren. He was extremely proud of his seven grandchildren and prayed for their success and happiness. Dad, we miss you and will continue to love, and honor you. Clarence is survived by his wife of 50 years, Jean McCollum; his daughters, Cindy (Dale) and Joy; step daughters Glenda and Lucretia; six grandchildren (Megan, Gabby, Cassandra, Victoria, Madison and Matthew); one step grandchild (Katie); his sister, Remell; his brother, JM (Barbra); and many nieces and nephews. He was preceded in death by his parents; sisters, Sybil (passed at birth), Jane (passed at birth) and Jackie; and brother, Howard. Visitation will be held on Wednesday, June 9, 2021 at 3PM followed by the Memorial Service at 4PM in the Historic Marietta Chapel of Mayes Ward-Dobbins Funeral Home. In lieu of flowers, it was his wishes that donations be made to the American Heart Association.

Clarence W McCollum was born to Tom McCollum and Ethel Matthews McCollum in Kennesaw (West Cobb), Georgia. He was the second of five children who were raised in West Cobb. Clarence passed peacefully from this life in the early morning of June... View Obituary & Service Information

The family of Clarence Wylder McCollum created this Life Tributes page to make it easy to share your memories.

Send flowers to the McCollum family.