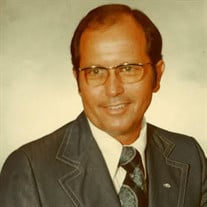 Cleveland Hanford Strickland, 92, died September 22, 2021. A Memorial Service will be held at 2:00 P.M., October 23, in the Sanctuary of Pembroke First Baptist Church, 169 Church Street, Pembroke, Georgia. There will be a procession to Northside Cemetery following the service. Born in Clyde, Ga, the Pembroke native, nicknamed “Butter” by his family, played basketball (Shooting Guard), loved boxing and playing trumpet. He delivered ice for the Pembroke Ice Company and made ice cream sodas at Dr. Smith’s Pembroke Drugstore until graduating Bryan County High School in 1946. He has been a Deacon of the First Baptist Church of Pembroke since 1964, and 68-year member of the Pembroke Masonic Lodge. He was Company Clerk in the US Army, studied Engineering at Armstrong State College, ran for Sheriff of Bryan County in 1956, paved roads for the Ga State Highway Dept., then formed C.H. Strickland Trucking Co in Dublin. Cleve received his Pilot’s license in his single engine Cherokee Piper in 1971. A Republican, Cleve campaigned for Senator Mack Mattingly, and President Ronald Reagan. Cleve was Salesman of the Year with Century 21in Savannah. Cleve was Chief Magistrate of Bryan County 1985-87. Cleveland took care of his mother, Edith, in her Pembroke home until she passed away. He and his best friend, Nelson, loved fishing at Lotts Creek. In 1990, his wife of 72 years, Evelyn Rogers Strickland, retired to Conyers to be near family. Cleveland received his Broker's license and formed Strickland Realty, Inc., and remained in Pembroke for two more years selling real estate. In 1992, he moved to Conyers with Evelyn, where he was a Realtor with Remax and ERA, and often appeared on ACE Hardware commercials. They were faithful members of the VFW and American Legion, where they danced every weekend. It was not uncommon to see them dancing in their garage, cul-de-sac, or the local sandwich shop. Their home was often filled with visiting nieces, nephews, and their children. At 75, he was diagnosed with Alzheimer’s Disease. Evelyn was his caregiver for 7 years, until they moved to Marietta with their daughter, Liz, in 2010, where they continued dancing for several years. At age 85, he was diagnosed with Progressive Supranuclear Palsy. His church membership is under the “watch care” of Marietta First Baptist Church, where Cleveland belonged to the Cup of Kindness home visitation group. At 18 years, Cleve was one of the longest survivors of Alzheimer’s and PSP, staying in the arms of his family, whom he often thanked for going on this journey with him. God’s obedient and trusting servant, Cleve balanced hard work and fun. Cleve died on the First Day of Fall (his favorite season), the Autumnal Equinox, when there is a balance of sunlight (a day and night of the exact same length) Cleve had a beautiful tenor voice and loved to sing around the house, just to his family. His favorite songs to sing are the soundtrack of his video tribute. Surviving: Wife Lena Evelyn, Daughter Cathy N. Creager DDS (Bob), Daughter Elizabeth Strickland (Vickie), Grandson James Harrison Creager (Morgan), Paternal Niece Joyce Ann Strickland (Greg), Paternal Nephews, S. Russell Strickland Jr., Brian D. Strickland, and Kenneth L. Strickland. Maternal Nieces: Jewel Lynn Cochrell (Glenn), Pamela Perkins Rogers, Amy W. Simons (Greg). Maternal Nephews: Earl Rogers Tindol (JoAnn), Richard Dean Tindol (Terry), Barry Martin Rogers (Debra Ann). There are many great cousins, nieces, and nephews. Cleveland is known for his willingness to forgive, no matter the circumstances. He accepted everyone, even if they were very different than himself. His personality was filled with humility and generosity, unwavering optimism, integrity, love of nature, love and nurturing of his family, and mostly his faith in God. His best friend Nelson noted, “If you ever met him, you didn’t forget him. You were drawn to him. He was unforgettable”. The ripple effect of his values and actions will continue to be honored through his family, friends, his team of doctors and caregivers. His beautiful smile will remain in our hearts forever. Cleve became a Master Mason on July 27th, 1953 with the purpose of becoming a better man through the precepts taught in the fraternity. The mission of the organization is to strengthen a man's character, improve his moral and spiritual outlook and to broaden his mental horizons. The longest term member of the Pembroke Masonic Lodge, Cleve was a major supporter of the Masonic Children's Home of Georgia. In lieu of flowers, please send donations to the Pembroke Masonic Lodge #469, P.O. Box 456, Pembroke, Ga. 31321. (912) 677-3663 Masks will be provided and required at Pembroke First Baptist Church. Mayes Ward-Dobbins Funeral Home in Marietta, GA is handling the arrangements.

Cleveland Hanford Strickland, 92, died September 22, 2021. A Memorial Service will be held at 2:00 P.M., October 23, in the Sanctuary of Pembroke First Baptist Church, 169 Church Street, Pembroke, Georgia. There will be a procession to Northside... View Obituary & Service Information

The family of Cleveland H. Strickland created this Life Tributes page to make it easy to share your memories.

Send flowers to the Strickland family.