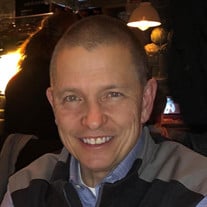 Curtis was born on October 7, 1961 in Canton, Ohio to Sally and William Rapp. He graduated from Ridgefield High School in 1979 and received his B.S. in Geology from the University of Rhode Island in 1983. He received his M.S. in Computer Science from Pace University in 1986. He married the love of his life, Leigh Ann Willard, in August of 1985. Curt was a devoted husband, amazing father, adoring grandfather, committed son and gracious friend. He was a dedicated follower of Christ and passionate lover of God’s Word. He is now in Heaven celebrating with his Lord and Savior. Curt was the beloved leader of his family, an avid golfer and SEC football fan. He loved working in his garden and playing with his grandchildren. His sense of humor and big heart made him a great friend to many. Curt delighted in serving his community in many volunteer roles throughout his life. Curt enjoyed a successful career in IT sales where he was a charismatic leader, a servant to his co-workers, and an incredibly hard worker. Curt was preceded in death by his father, William Rapp. He is survived by his mother, Sally Rapp; loving wife, Leigh Ann Rapp; children Kate (Wade) Hill, Abby (Hayden) Wingate, Sam (Grace) Rapp; brother, Allen Rapp and sister-in-law, Anita Rapp. He is also survived by his three adoring grandchildren, John Henry (4) and Charlotte Katherine (2.5) Hill; Wyatt (2) Wingate. Visitation will be held Sunday, September 19 from 4:00pm – 6:00pm at Mayes Ward Funeral Home, 180 Church Street, Marietta., Georgia. A memorial service will be held at First Baptist Church, Marietta on Monday, September 20 at 2:00 PM. Additional parking is available at Mayes Ward-Dobbins Funeral Home. Masks are requested. The family requests no flowers, but if you would like to make a gift in memory of Curt, please consider donating to Christ the Redeemer Church Marietta, 531 Roselane Street, Marietta GA 30060.

Curtis was born on October 7, 1961 in Canton, Ohio to Sally and William Rapp. He graduated from Ridgefield High School in 1979 and received his B.S. in Geology from the University of Rhode Island in 1983. He received his M.S. in Computer Science... View Obituary & Service Information

The family of Curtis William Rapp created this Life Tributes page to make it easy to share your memories.

Send flowers to the Rapp family.