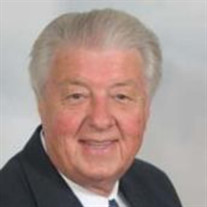 Darrell Eugene Dickerson of Marietta went home to be with his loving Savior on April 18, 2022. Darrell was born on July 25,1930 in Bowman, Georgia. He was the son of Delmas Waymon and Ida Sarah Lunsford Dickerson. In addition to his parents, Darrell was preceded in death by his wife JoAnne Lee Dickerson, two daughters Darrilyn Ann Dickerson Wheeling, and Candice Michelle Dickerson Mills, and a brother Norman Edward Dickerson. He is survived by his daughter Ashley Lee Dickerson Maeger (David) and granddaughter Kayla Lee Maeger. He is survived by grandchildren Sayana Mills and Curtis Mills, sister-in-law Sophia Dickerson, nephew Ronald Edward (Valerie) Dickerson, and brother-in-law Rev. Tom Lee, and other nieces and nephews. He is an alumnus of the University of Georgia class of 1952 and a lifetime member of the University of Georgia Alumni Society. As a very devoted Bulldawg fan, he is also a member of the University of Georgia Bulldog Club since 1964. Darrell had the distinct privilege and honor to serve his country by joining the US Army whereby he served during the Korean War conflict. He is considered it an unbelievable honor to be in the military and serve his country in this great land for freedom’s sake. After military, he worked briefly for Lockheed before the City of Marietta called. As an employee of the city of Marietta he was blessed to believe that, as such, he was on a mission for the city by helping people and administering the laws of the city pertaining to the Business License Division operation along with emphasis on public relations to the city taxpayers. He stated he could never repay the city for what they had done for him and his family. It was a splendid journey and a blessing to serve the people and the taxpayers of Marietta beginning in February 15, 1960 until his retirement on November 1, 1997. Darrell was a dedicated ambassador for the City of Marietta as he reached out to the city tax payers and to becoming a special part of the City of Marietta. He enjoyed selling the city to new annexation prospects who would enjoy the services and benefits of the city thereof. Darrell was a member of Mount Paran Church in Atlanta since February 1984 and has been blessed to serve as an Elder since October 1987 and has co-chaired a money counting committee for 35 years. Darrell was an active member of the Cobb County Honorary Commanders Association having joined the Association in 1984 and currently remained active in this special association. While employed at the City of Marietta, it was his privilege along with a lot of assistance from other staff personnel from Marietta and other governments to form an organization called Georgia Association of Business License Officials (GABLO). GABLO assists governments and establishes an administrative guidelines relating to the business license regulations an ordinances. It was a valuable tool to bring business license divisions together statewide to cultivate new ways and means to fine tune our operations to perfect efficiency in our services for better and more efficient government. Darrell was a co-founder in 1964 of CMAR Credit Union for City of Marietta employees thereby available to other governments and businesses who wish to join this institution; which provided excellent financial services to its members there with resulting in a benefit to all employees. He served in the credit union movement for over 42 years and was chairman of the Board for over 25 years. Darrell enjoyed his hobbies of playing golf, hunting, fishing, reading, and attending UGA games in Athens. He enjoyed studying etymology. He was a dedicated Christian. Darrell loved his Lord, his wonderful family and friends, The University of Georgia, the City of Marietta, and this great land called America. All of which he was so thankful and grateful for along with Mount Paran Church. Upon his retirement, Darrell established “The Darrell Dickerson Award” with the City of Marietta along with monetary award to be given to an employee selected by the city who represents the ideals of the honoree, one who excels in providing excellent services to Marietta Taxpayers and one who emphasizes public relations for the City of Marietta. In addition to Darrell’s duties in the Business License Division, the one subject that he excelled and delighted in was the business of “selling the city concept” or reaching out to businesses or taxpayers to annex into the corporate limits of Marietta because of the fine services the city offered, favorable taxes, and a City Hall that is an easy place to conduct business. Further, this also added new revenue to the city through permits, license fees, taxes, and other miscellaneous taxes which enabled our city to grow, prosper, and expand the city limits.Upon his retirement, he has been self-employed and licensed as a real estate broker, whereas since July 2002 he has been affiliated with Coldwell Banker Residential Brokerage as an associate broker in West Marietta. Graveside services will be at 2:00 PM Friday, April 22, 2022 at Kennesaw Memorial Park Cemetery in Marietta with Dr. David Cooper, Pastor Kent Hawkins, and Pastor Steve Heifner officiating. A public viewing will be from 11:00 AM to 4:00 PM, Thursday at Mayes Ward-Dobbins Historic Marietta Funeral Home. In lieu of flowers, contributions may be made to Mount Paran Church in Atlanta. www.mayeswarddobbins.com 770 428-1511

Darrell Eugene Dickerson of Marietta went home to be with his loving Savior on April 18, 2022. Darrell was born on July 25,1930 in Bowman, Georgia. He was the son of Delmas Waymon and Ida Sarah Lunsford Dickerson. In addition to his parents,... View Obituary & Service Information

The family of Darrell E. Dickerson created this Life Tributes page to make it easy to share your memories.

Darrell Eugene Dickerson of Marietta went home to be with his...

Send flowers to the Dickerson family.