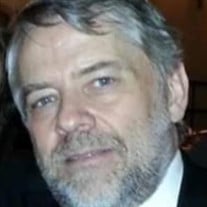 Demetrius Lymberopoulos, 66, of Marietta passed away on Wednesday, May 27, 2020. A service will be held at 11:00 am on Monday, June 1st at Holy Transfiguration Greek Orthodox Church in Marietta. Demetrius was predeceased by his parents, Vasilios and Georgia Lymberopoulos. He is survived by his wife, Dora Lymberopoulos; daughter, Eleftheria Zoheir and her husband, Rachid; three grandchildren, Sofia Zoheir, Nadia Zoheir and Joseph Zoheir; two sisters, Eleni Kokkotas and Panagiota Adamopoulos. He is also survived by several nieces, nephews and extended family in Greece and in Australia. Demetrius was born in the village of Anavrytos, Arcadia, Greece. He was raised in Athens and moved to New York upon graduating High School. He attended LaGuardia Academy of Aeronautics and New York Institute of Technology and obtained his degree in Mechanical Engineering. Demetrius went on to begin his career in the aerospace industry at Fairchild and ending at Lockheed Martin where he worked as Design Aircraft Engineer for over 25 years. Demetrius retired from Lockheed Martin in August of 2016 and as much as he loved living his life with his family here, he also loved spending time with family in Greece and Australia. Demetrius loved to be outdoors, he enjoyed gardening so much he even became a Master Gardener through the University of Georgia's extension program. Demetrius loved to take walks, go hiking, traveling to unkown places and most of all making long lasting friendships around the world. Demetrius was also a wonderful cook and enjoyed entertaining and cooking up a storm whenever he had company. There wasn't a person who met Demetrius that didn't love him. Demetrius was a true servant of the Lord and his whole life he demonstrated it by always helping those in need and loving all whom he met. Demetrius was known as an active member of Holy Transfiguration Greek Orthodox Church for over 25 years. Demetrius was known, loved and well respected by his church family and he touched anyone he met in the most profound way. Demetrius was a humble, simple, honorable man of dignity and grace and respect for all people. Demetrius was known for his intellectual acumen, generosity and selfless service to others and the Lord. While attending NYTech he met in 1973 and married his wife Dora (Escobar) and have spent the last 47 years of their lives together traveling and living in various places while making friends across the world. In August of 1974, his only child, Effie was born and raised in NY until the age of 12. Demetrius and his family then moved to Greece, Florida, California and finally Georgia in 1991 where they have lived ever since. Demetrius loved his family with his heart and soul and everything he did in life was for them and their well being. In January of 2005, his first granddaughter, Sofia, was born and then in December of 2005 he was blessed with his second granddaughter, Nadia. Demetrius loved his girls fiercely and doted on them at all times. In March of 2014, his grandson, Joseph Elias was born and again was one of his greatest joys in life. Pappou would always say to Joseph, "who's my boy or where's my boy". As Demetrius is now with our Lord and Savior, is at peace and is resting, his absence will be a void that can never be filled. Our family is truly devastated and we know our loss is a loss for all. Our family extends their gratitude and appreciation to all our friends and family that have been so gracious with us during this trying time. Your many calls, texts, cards, words of love, memories of Demetrius are a sign of pure love and a testament to his legacy.

Demetrius Lymberopoulos, 66, of Marietta passed away on Wednesday, May 27, 2020. A service will be held at 11:00 am on Monday, June 1st at Holy Transfiguration Greek Orthodox Church in Marietta. Demetrius was predeceased by his parents, Vasilios... View Obituary & Service Information

The family of Demetrius Lymberopoulos created this Life Tributes page to make it easy to share your memories.

Demetrius Lymberopoulos, 66, of Marietta passed away on Wednesday,...

Send flowers to the Lymberopoulos family.