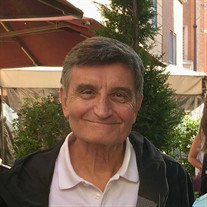 Donald (Don) Carl Webb passed away after a short illness on August 24, 2021. Don was born in Albany, New York. He was the only child of the late Carl Webb and Verona Brown Webb. Don was a devoted husband to his wife of 52 years, Eileen Timm Webb. He was a loving father to his children Wendy Childress and her husband, Kelly, of Oxon Hill, Maryland, and Don Webb, Jr and his wife Laura, of Cumming, Georgia. His beloved grandsons are Ryan Andon Webb and Connor Thomas Webb. He spent as much time with them a possible and loved attending sporting events that his grandsons participated in. Don was a calm, caring person with a special passion for his grandsons, trains, and Corvettes. He loved to travel with the family, having visited almost every National Park from Acadia in Maine to Volcanoes in Hawaii. The favorite family vacation would be Disney World, where he visited too many times to count. He graduated from Purdue University with a degree in Mechanical Engineering. Don was a life member of the John Purdue Alumni Association. He worked as a supervisory engineer at the General Motors Tonawanda motor plant in Buffalo, NY for almost four decades. He was a life member of the American Society of Mechanical Engineers (ASME). Don served in the U.S. Army as an engineer with a rocketry focus while stationed at White Sands Missile Range in New Mexico. He was a member of the Captain John Collins chapter of the Sons of the American Revolution (SAR). Don was very proud of the fact that his great-great-great-great-grandfather served in the Revolutionary war. He loved doing ancestry research with his daughter Wendy. He was very active in the Train Collector Association (TCA), serving as secretary of the Dixie Division for the past dozen years. He served as the tour chairman for the 2012 National Convention held in Atlanta and was planning the 2022 National Convention in Nashville. Don was a car enthusiast and owned numerous Corvettes since 1965. He was a member of the Classic Glass Corvette Club of Atlanta. His wife and children have never known him without a Corvette! He met weekly with a men’s group for coffee and also with a group of friends nicknamed the ROMEOS for lunch. He looked forward to each group with great anticipation. These meetings were a highlight for Don. Private burial will be at the convenience of the family at the Georgia National Cemetery in Canton, GA. Family has asked in lieu of flowers that donations be made in Don’s name to Folds of Honor at www.foldsofhonor.org. Arrangements under the caring guidance of Mayes Ward-Dobbins Funeral Home.

Donald (Don) Carl Webb passed away after a short illness on August 24, 2021. Don was born in Albany, New York. He was the only child of the late Carl Webb and Verona Brown Webb. Don was a devoted husband to his wife of 52 years, Eileen Timm... View Obituary & Service Information

The family of Donald "Don" Carl Webb created this Life Tributes page to make it easy to share your memories.

Donald (Don) Carl Webb passed away after a short illness on August...

Send flowers to the Webb family.