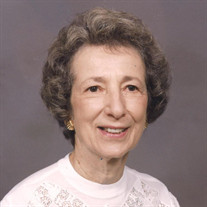 Our beloved Aunt Ellie, Elaine Brennan, passed from this life on April 4, 2022 at the age of 93. Aunt Ellie was born in New York City in 1928. Her mother tragically died of pneumonia before Elaine was 2 months old. She and her older brother were taken in and raised by her mother's devoted sister, our English grandmother Nell Meyer. Nell had two girls of her own, so the four children were raised as siblings in a multi-generational household with lots of love, summers at Sag Harbor beach and English traditions of tea and Yorkshire pudding. Aunt Ellie grew up to become an office manager for a plumbing company where she was much appreciated for her smarts, her organization skills, her sense of humor and her cheerful nature. She retired there after 40 years. But her real life's work was to care for our grandmother, who used to tell Elaine that she couldn't love her more if she had given birth to Elaine herself. The two resided in Parkchester in the Bronx and attended church, played cards and had a wide circle of friends. When their neighborhood became unsafe, they followed the rest of their family to Marietta in 1979. We lost our dear grandmother in 1982. Aunt Ellie married Tom Brennan, an Irishman much older than she, in 1988. They eventually built their own house in Marietta, but her husband died shortly after they moved in. Later, an old friend from her days at the plumbing company managed to find her on the internet, and Steve Sasala became her companion and true love. Together they line-danced, attended First Presbyterian Church faithfully, and enjoyed some travel before their ages eventually caught up with their ambitions. Steve passed away in September of 2020. Elaine Brennan was very kind, religious, sensitive to others, a lover of all animals but most especially Dolly Mae, her beloved Pomeranian. Her most important priority was always her family. She was a very faithful person, a devoted member of First Presbyterian Church of Marietta. Her extended family members were baptised there, married there and attended with her on occasion. Her influence on all of us was always positive and loving. She was the last of her generation for us and we will miss her greatly. Service of remembrance will be held Friday, April 8th at 2:00 pm at First Presbyterian Church, 189 Church Street, Marietta, GA 30060.

Our beloved Aunt Ellie, Elaine Brennan, passed from this life on April 4, 2022 at the age of 93. Aunt Ellie was born in New York City in 1928. Her mother tragically died of pneumonia before Elaine was 2 months old. She and her older brother... View Obituary & Service Information

The family of Elaine "Ellie" Brennan created this Life Tributes page to make it easy to share your memories.

Our beloved Aunt Ellie, Elaine Brennan, passed from this life...

Send flowers to the Brennan family.