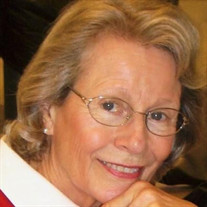 Eleanor Childs Lorenz, wonderful mind, highly educated and trained artist, and gifted writer came to rest on Feb. 05, 2022. She was born Oct. 21, 1936, in Nova Lisboa, Angola, Southwest Africa as the third daughter to Margaret Pfaeffli, a Huguenot medical missionary, and Gladwyn Murray Childs, D.D., a Congregational missionary with a PHD in Anthropology from Columbia University. At 13 years of age, Eleanor was dispatched on a Norwegian freighter to complete her education in Boston, Massachusetts. She graduated from Newton High School in Boston and was accepted for admission on a scholarship to Oberlin College in Oberlin Ohio. Upon graduation with a degree in English Literature, she was employed at the Harvard Dental School in Boston. After considerable success writing scientific papers for the department head, she transferred to the Hematology-Oncology section at LSU Medical School in New Orleans, writing scientific papers for John Bickers, M.D. Eleanor was then sent to San Jose, Costa Rica to set up a Hematology and electrophoresis laboratory. After she returned to New Orleans, she was introduced by Dr. Bickers to her future husband Max P. Lorenz, M.D. who was doing a rotation in hematology as an Intern. After a wonderful courtship, Max was called to active duty as a flight surgeon at Brooks AFB, San Antonio, TX. He proposed to her by telephone from Texas and they were married the following Saturday at St. Paul’s Lutheran Church in New Orleans. She accompanied Max to Lockbourne AFB, Columbus, Ohio where she was employed in the Dept. of OB-GYN at Ohio State University Hospital. Fourteen months after marriage, she gave birth to a son, Max John II, of Marietta GA. After her husband Max completed his tour of duty, they returned to New Orleans where he completed his residency in Urology at Charity Hospital. Eleanor delivered three additional children, a son Martin Austin (deceased), a daughter, Leslie Michelle of Winterville, GA., both born at Touro Infirmary in New Orleans, and the fourth child, Alexander Paul of Miami FL, born in Atlanta. While in Marietta, GA, in addition to being an incredibly present and affectionate mother; she gave endless amounts of time and effort to Westside School, the Cobb County Medical Auxiliary, and the Cobb-Marietta Museum of Art. She was lead clothing designer and maker of countless costumes for the Cobb-Marietta Ballet. She was active in the Youth Museum as well as in classroom education at Westside school. Eleanor was an exceedingly prolific and talented artist in a host of media and formats, including sculpture, painting, wood-block printing, pencil- and pen-drawing, pastels, and watercolors. Eleanor was a very active member of St. James Episcopal Church of Marietta, where she sang in the choir, volunteered in the kitchen, assisted in Sunday school classes, worked with youth groups, and was a compelling and frequent lay reader. Eleanor and Max were widely travelled; they drove to all of the continental United States, and all Provinces of Canada. She was an avid bicyclist and rode hundreds of miles in the Dordogne, the Loire, the Seine River valleys and The Alsace-Lorraine region of France, while being near-fluent in French. She was an active blue-water diver and sailor, having sailed Chesapeake Bay, the Bahamas and the American and British Virgin Islands. She and husband Max expatted in Ireland, studied painting with Janice Beck in France, and spent extensive time in Europe, Turkey, North Africa, Egypt, China, Israel, Japan, Brazil, Chile, South Africa, Kenya, and Scandinavia. She road-tripped with her husband Max from Marietta, to Yellowknife, Northwest Territories in Canada, and back. Eleanor was a very loving wife, mother and grandmother. She was predeceased by her husband Max Paul Lorenz M.D. FACS by fourteen months, and by her second son, Martin Austin, who died at age 33 of Non-Hodgkins Lymphoma. She is survived by her three remaining children, Max John II, (spouse Darla) of Marietta, Leslie Michelle of Winterville, GA and Alexander Paul of Miami, FL. (spouse Elnaz). Eleanor is also survived by six grandchildren, Max Alexander, Emily Ann, and Ashleigh Logan, of Marietta GA, Beverly Eleanor, and Leni Michelle of Winterville, GA., Nina of Frutillar, 2 step-grandchildren, Corey Evans of Marietta, GA., and Ashley Evans of Atlanta, GA. She was a considerable source of light in the lives of many and will be fondly remembered The family will receive friends 6-8 PM Thursday, February 10th at Mayes Ward-Dobbins Funeral Home in Marietta.

The family of Eleanor Childs Lorenz created this Life Tributes page to make it easy to share your memories.

Send flowers to the Lorenz family.