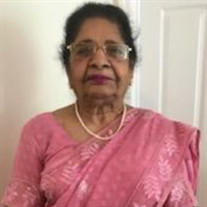 Endora was the third child of Michael & Daisy Roberts, born in the lovely city of Gorakhpur, UP India, the North Eastern Railway Zone and the Administrative Headquarters of the Indian Railways. Her parents were extremely Godly and the children were groomed with the best Christian teachings and education. She grew up into a lovely young lady and completed her Senior High School. She was an intelligent student and desired to pursue a medical career, but a young Christian Police Officer , William B. Massey who was visiting their home with a family friend and she immediately caught his attention. The handsome young officer was attracted by her beauty and asked for her hand in marriage. With the consent of the parents of both the families, they were both married in 1955. With the many transfers of her husband to many cities & towns of the State of Uttar Pradesh (UP) God blessed them with four daughters Anjana, Ranjana, Shahana, Sunaina and a son Shailendra. The dream of the parents was to provide all their children with the best education and were therefore sent to the top class educational Institutions. Her husband a very honest and dedicated officer was given several promotions and he moved all over the State with Endora and the children moved with them. In every city/town they were posted, the local Church and Christian Community felt greatly honored to have a high ranking Christian officer in their city. Endora had fond memories of the people and places and of their role in building the lives of many under privileged Christians. During Christmas they would visit her brothers and sisters in Gorakhpur. After her husband's retirement, the family decided to settle in Lucknow, UP. Unfortunately, William B. Massey died in 2003, followed by the sudden death of their eldest son in law Jonathan Paul within two weeks. This was devastating for Anjana who was left alone in the USA. In 2005 she joined Anjana and started her new life in the USA which she greatly enjoyed. The mother and daughter went on trips together to the Mall and do grocery shopping She was an extremely religious person, prayed and read the Scriptures daily for two hours in the morning and an hour at night. She was also very hospitable and anyone visiting her house was fed a proper meal. She was a very friendly person, mingled and spoke with everyone she came across. Following a heart attack, she was in hospital for three weeks. The doctors failed to revive her and on March 26, 2021 her life support was removed and shortly thereafter she went to be in the presence of her Lord Jesus, who she had followed and loved throughout her life.

Endora was the third child of Michael & Daisy Roberts, born in the lovely city of Gorakhpur, UP India, the North Eastern Railway Zone and the Administrative Headquarters of the Indian Railways. Her parents were extremely Godly and the children... View Obituary & Service Information

The family of Endora Champa Massey created this Life Tributes page to make it easy to share your memories.

Endora was the third child of Michael &amp; Daisy Roberts, born in...

Send flowers to the Massey family.