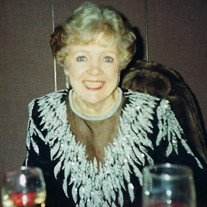 Esther H. “Tess” Gay, a Marietta resident, passed away peacefully in her home on Sunday, September 20, 2020, just 6 days after her 101st birthday. She was a loving and devoted wife, mother, grandmother, great-grandmother and friend. She will be dearly missed by everyone who knew and loved her. Tess was born September 14, 1919, and has seen this world change over many times. Her decorated life is remembered in pictures of her as a Rosy the Riveter and War Bond type of girl. Her help to the U. S. Navy did not go unnoticed. On her 100th birthday in 2019 she was greeted by men and women in uniform reading letters from Senators and high-ranking Navy officials thanking her for her dedication to commemorating the Battle of Midway long after her war hero husband passed away. Her dedication and love for the United States and the United States Navy was unwavering and a huge public service. She was a source of inspiration to many. Tess is reunited with her loving daughter Sandi Heimbach of Broken Arrow, OK, and her beloved husband Ens. George Gay. She is survived by her son-in-law Alfred Heimbach and granddaughter Teri French of Broken Arrow, OK; her grandson Eric Staalsen and his wife Rose of Knightdale, NC; great-grandchildren Brayden French and Desaree Fields, Richard French and fiancée Joyelle Kozlinski; and one great-great granddaughter Aviah French, all of Broken Arrow, OK. She is also survived by Debbie Lebrun of Henniker, NH, her best friend Anne Peters of Acworth, GA, numerous close friends, cousins, bridge players, as well as a team of wonderful and loving caregivers. Tess had an amazing life, was a world traveler, and left her mark on everyone she met. She had a ritual of one martini at 5 p.m. every day, all the way past her 100th birthday! She concluded it was her secret to a long life. No services will be held locally, and her ashes will be taken to Broken Arrow, OK, to be buried with her daughter Sandi who just predeceased her last month. Donations may be made in loving memory of Tess to Homestead Hospice, 1 N. Tennessee Street, Cartersville, GA 30120.

Esther H. &#8220;Tess&#8221; Gay, a Marietta resident, passed away peacefully in her home on Sunday, September 20, 2020, just 6 days after her 101st birthday. She was a loving and devoted wife, mother, grandmother, great-grandmother and friend.... View Obituary & Service Information

The family of Esther H Gay created this Life Tributes page to make it easy to share your memories.

Send flowers to the Gay family.