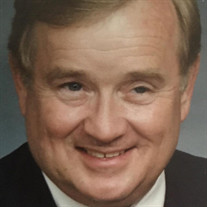 Dr. Eugene Huffine Moody of Athens, and recently of Dallas, GA, passed away on February 6, 2021 at Wellstar Tranquility Hospice at Kennesaw Mountain in Marietta, GA. He was born in Macon, GA on December 30, 1937. After graduating from Lanier High School in Macon, he graduated from the University of Georgia with Bachelor’s and Master’s degrees. After serving as assistant county agent with the Cooperative Extension Service in Cobb County, he enrolled at the University of California-Davis, where he received a PhD in Plant Pathology/Nematology. Following two years as Assistant Professor at the University of Tennessee-Knoxville, he returned to the University of Georgia as Professor for the remainder of his career. At his retirement, he was designated as Professor Emeritus. Over the years he served as a consultant to many plant nurseries. Gene enthusiastically involved himself in varied interests. A talented musician, he had been accepted to The Juilliard School in his youth but chose music as his avocation. His beautiful tenor voice could be heard in many church choirs, at countless weddings, and in his love for choral music as a member of the Athens Master Chorale, whose conductor led the group in a performance at Carnegie Hall. He was a lover of the outdoors and usually included hiking in trips along the Appalachian Trail or while visiting Hawaii, Alaska, the western USA, Canada, or Europe. He supported his beloved UGA Bulldogs, and he rarely missed watching UGA football. He served as leader and mentor for several youth organizations including Methodist Youth Fellowship and Scouting. He was a longstanding member of Tuckston United Methodist Church. He is survived by his loving wife of 61 years, Suzanne Sutton Moody, daughter Louise Tharp (Jeffrey), son Eugene H. Moody, Jr. (Karen), grandson Addison Tharp, sister Rose Rhone (Guy), brothers Terry Moody (Gynnie) and Steven Moody (Carole), as well as many nieces and nephews. He was preceded in death by his parents, Julian E. Moody and Matilda H. Moody and by a brother Julian E. Moody, Jr. (Harriet). A private memorial service will be announced for a future date as pandemic conditions improve. In lieu of flowers, memorial contributions may be made to Tuckston United Methodist Church, Athens (www.tuckston.org/give) or the Wellstar Foundation (www.wellstar.org/givetohospice). Mayes Ward Dobbins in Marietta is entrusted with arrangements. www.mayeswarddobbins.com 770 428-1511

Dr. Eugene Huffine Moody of Athens, and recently of Dallas, GA, passed away on February 6, 2021 at Wellstar Tranquility Hospice at Kennesaw Mountain in Marietta, GA. He was born in Macon, GA on December 30, 1937. After graduating from Lanier... View Obituary & Service Information

The family of Eugene Huffine Moody Sr. created this Life Tributes page to make it easy to share your memories.

Send flowers to the Moody family.