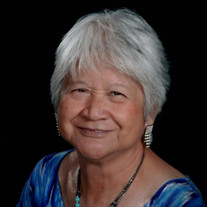 Filipinas Sayson Belarmino was born in Manila, Philippines on May 4, 1940 to Leopoldo and Socorro Sayson (Bagano). She lived her childhood and early adult years in the Philippines where she obtained her Bachelor of Science degree in Textile Engineering at the Mapua Institute of Technology where she met her future husband Moises Pineda Belarmino. Mrs. Belarmino resided in the Philippines until she immigrated to the United States to Jersey City, NJ with her husband in 1971. They later relocated to Macon, Georgia where they raised their three children; Heloise Belarmino Jones (Marietta, GA), Victor Francis Belarmino (Burke, VA), and Michael Marcus Belarmino (Washington, DC) and where she lived most of her adult life until moving to Marietta, GA in 2017. Mrs. Belarmino was known to be actively engaged in the community and volunteered at the elementary, middle and high school that her children attended, where she was affectionately known as Momma Belarmino by many. She always had a kind word, always ready to offer wise words of wisdom and an open door to her home for any in need. She never met a stranger in that she spoke to everyone and met everyone with her contagious smile and laughter. She was an avid member of Holy Spirit Catholic Church in Macon, GA and was known throughout the church community volunteering with the Women’s Group and wherever she was needed. Upon moving to Marietta, GA in 2017 she then became a member of St. Joseph’s Catholic Church. Mrs. Belarmino was a devout Catholic and her faith was evident in everything she did, the people she met and all those she ministered to. She is preceded in death by her parents Leopoldo and Socorro Sayson, her three sisters, Virginia Ciar, Cynthia Cardoza, Daisy Lou Bacay and one brother Christopher Sayson all of Manila, Philippines. She is survived by her husband, Moises Pineda Belarmino, her three children, Heloise Belarmino Jones, Victor Francis Belarmino and his wife Judy, and Michael Marcus Belarmino and his wife Tammy and her five grandchildren, Kerrigan Elise Jones, Mackenzie Grayson Jones, Nicolas Akkadet Belarmino, Mateo Thanadet Belarmino, and Gabriella Mei Belarmino along with one sibling, her sister Louella Wong and her family and numerous nieces and nephews. Her simplistic view on life, her words of wisdom, her strong faith, her infectious laugh and beautiful smile will be missed by those who knew her and loved her. Her spirit will remain in all of us and will be forever etched in our hearts. In lieu of flowers, the family requests a donation be made in her honor to the following organizations, if you are so led: American Stroke Association- www.americanstroke.org American Brain Foundation - www.americanbrainfoundation.org Dementia Society of America - www.dementiasociety.org There will be a private funeral mass on Saturday, September 11th at St. Joseph’s Catholic Church to be followed by a celebration of her life.

Filipinas Sayson Belarmino was born in Manila, Philippines on May 4, 1940 to Leopoldo and Socorro Sayson (Bagano). She lived her childhood and early adult years in the Philippines where she obtained her Bachelor of Science degree in Textile... View Obituary & Service Information

The family of Filipinas Sayson Belarmino created this Life Tributes page to make it easy to share your memories.

Filipinas Sayson Belarmino was born in Manila, Philippines on...