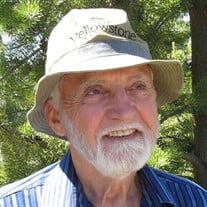 Francis Michael Christ, Sr. of Marietta, GA, beloved father, husband, and son, drew his final breath on December 26, 2021, in peace, after nearly a century of doing and building. He was predeceased by his beloved wife of 66 years, Florence Mary Sullivan Christ, and by his son, James Patrick Christ. He is survived by son Francis Michael Christ, Jr. and daughter in law Chun Li of Berkeley, CA and granddaughters Miranda Jing Christ and Oriana Xin Christ; by daughter Patricia Julie Christ and partner Robert Medwed of Blairsville, GA, grandson Michael Mehran Nagshineh and wife Alma Solis, granddaughter Sarah Shadi Erarslan and husband Baris, and granddaughter Alice Nasseem Nagshineh and partner Randy Morton; by daughter in law Carol Hamelink of Laurel, MD; by daughter Karen Louise Christ and son in law Richard Ackman of Windsor Mill, MD; and by daughter Mary Florence Christ and partner Philip Yosowitz of Houston, TX. Services will be held at St. Joseph Catholic Church in Marietta on Wednesday, January 5, 2022 at 10:00 AM. Frank will lie at rest in the Georgia National Cemetery. Frank was born on July 23, 1927 in Chester, PA, the only child of Francis Matthew Christ and Sara Gorman Christ. At St. James High School in Chester he excelled in track, especially at 440 yards. He was named the team's most valuable athlete, and was the Philadelphia area Catholic league champion. The family later moved to Swarthmore, PA. Frank enlisted in the wartime US Navy, sailing to Shanghai (seasick every day at sea, plus one) and back, accumulating a trove of stories to be retold for the rest of his days. He attended Villanova on the GI bill, declining a track scholarship and earning a degree in engineering. Early in his working career he transitioned to management, to which his temperament and leadership instincts were suited. Frank married Florence Sullivan on July 12, 1954. From his commitment to love, honor, and cherish, in sickness and in health, there was no wavering over the ensuing 66 years. Frank's career took him from Wilmington, to New Jersey; to Decatur, Illinois; to Englishtown, New Jersey; to Glendale, Wisconsin; to Stow and Silver Lake, Ohio; and finally to Las Vegas, where he retired in 1992. He was Plant Manager for W. H. Brady in Glendale, then for Morgan Adhesives/Mactac in Stow, and finally for Mactac in Las Vegas. He was a hands-on manager who took pride in the many miles he walked daily, keeping tabs on the farthest corners of his domain. Frank loved Yellowstone NP. His visits included a honeymoon; a round trip drive from Wisconsin with wife, camper trailer, and five children; a dead of winter stay at the lodge; and at age 80, a glorious summer tour with wife, son, daughter in law, and granddaughters in which he hiked all of the trails. Frank was an ardent skilled craftsman who also enjoyed walking, golf, hunting, and whitewater rafting, especially with family. After retirement, he avidly explored the mountains, canyons, and desert surrounding Las Vegas. In his later years he portrayed Uncle Sam in the annual Marietta July 4 parade, led his retirement community's residents' association, and was in demand as a reader of scripture at Atherton Place religious services. All heart and will, Frank ran through the tape of his finish line.

Francis Michael Christ, Sr. of Marietta, GA, beloved father, husband, and son, drew his final breath on December 26, 2021, in peace, after nearly a century of doing and building. He was predeceased by his beloved wife of 66 years, Florence... View Obituary & Service Information

The family of Francis Michael Christ created this Life Tributes page to make it easy to share your memories.

Send flowers to the Christ family.