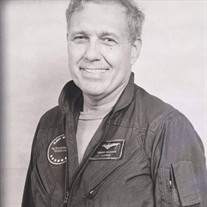 Francis “Frank” Dillard Hadden was born to fly. From the age of five that is what he wanted to do, so he was one of the lucky few who got to live his passion. Frank, age 88, passed away March 26, 2022, in Marietta, GA, after a brief illness. He was preceded in death by his loving wife of 61 years, Nancy Jean Stevenson Hadden, his parents Joseph Stoner Hadden and Cozine Walker Winch Hadden. He is survived by his children Craig Steven Hadden of Dallas, GA; Lynn Allison Hadden of Powder Springs, GA; his sister Nikki Hadden Faulkner (Hank) of Austin, TX; nephew Gregory Hadden Faulkner (Brooke) of Boston, MA; niece Sarah Kerwin Faulkner Fangsrud (Adam) of Missoula, MT; Lauren Vanover (Clint), Richmond Hills, TX; Michelle Maxfield of Austin, TX, great-grandchildren, great nieces and nephews. Born in Hollywood, CA, November 14, 1934, Frank’s family moved to Louisville, KY, where he grew up and graduated from DuPont Manual High School for Boys and played basketball there. After two years at the University of Florida he joined the United States Marines Corps, training at the Naval Air Station in Pensacola, FL, then receiving his “Wings” in 1955 in Corpus Christi, TX, as a Lieutenant in the USMC. In 1956, Frank and Nancy were married in Lake Wales, FL. After serving with the Marines in Japan for two years, he returned to the University of Florida and received his degree in Aeronautical Engineering. He worked for The Boeing Company in Seattle, WA, for three years before moving to Marietta, GA, in 1963, to work for Lockheed. In 1965, he graduated top of his class in Aerospace Engineering Flight Testing from the United States Naval Test Pilot School in Patuxent, MD. Frank worked at Lockheed for the rest of his 34-year career, retiring in 1997 as the Director of Flight Operations. Frank remained in the USMC Reserves, commanding the Vought F-8 Crusader Squadron at Naval Air Station- Atlanta, and retired as 0-6 Marine Colonel. At Lockheed, Frank flew the C-5, C-141, C-130, and the Jetstar. He was the Project Pilot on the "stretched" B version of the C-141. He demonstrated and delivered Lockheed aircraft all over the world. He was copilot on the Demonstration of the C5-A at the Paris Air Show in 1971, which required a skilled copilot to assist in executing a very short landing. Frank was Project Pilot on the C141-B Starlifter Project in 1977, and his flight colleagues are quoted as saying, “No one knew more about this aircraft than Frank Hadden”. He was the pilot on the C-130 High Technology Test Bed at the 1985 Paris Air Show. He also set world records in 1985 (9,000 vertical ft/9 minutes) and in 1989 (6,000 vertical meters/7 Minutes). He was Project Pilot on the Grumman Gulfstream II Prop Fan Test Aircraft in 1987. Frank was a member of the Society of Engineering Test Pilots (SETP), the Daedalians Organization – Fellowship of Military Aviators, First United Methodist Church of Marietta and the Jack Aaron Sunday School Class, The Marietta Country Club, and a 20+ year member of The Boisterous Breakfast Club at Clell’s Diner and the Marietta Diner. Frank and Nancy enjoyed traveling – especially Space-A with other retired Military friends. Some of their most memorable trips were to Italy, Germany, Hungary, England and Wales. He also volunteered at the Aviator History and Technology Center in Marietta. With his great sense of humor and bright smile, he was a “Pilot’s pilot”, an avid supporter of the Florida ‘Gators and the Atlanta Braves, and always, always a Marine. Semper Fi and Go ‘Gators! Arrangements are as follows: Visitation from 1:00p.m. to 2:00p.m. on Saturday, May 14th, 2022 with a Memorial Service immediately following the visitation at 2:00p.m. at Mayes Ward-Dobbins Funeral Home and Crematory, Historic Marietta Location, 180 Church Street, Marietta, Georgia 30060 In lieu of flowers, donations may be made in Frank Hadden’s memory to: Aviation History and Technology Center, 555 Perrin Rd., Marietta, GA 30060, or to Daedalians (in support of future aviators), P.O. Box 249, JBSA-Randolph, TX 78148 The family offers heartfelt thanks to Rosemary Godelight, whose loving and loyal care helped Frank tremendously as his health declined.

The family of Francis "Frank" Dillard Hadden created this Life Tributes page to make it easy to share your memories.

Francis “Frank” Dillard Hadden was born to fly. From the age...

Send flowers to the Hadden family.