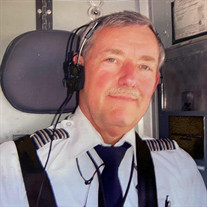 It is with great sadness that we say goodbye to Frederick “Fred” Arthur Gimson, beloved father, grandfather, husband, brother, uncle, and friend. He died at home on May 1st, 2022 surrounded by family after a year-long struggle with cancer. Fred lived 75 full years of life, most recently with his wife Diane Hoey in Marietta. Fred was born November 6, 1946 in Bellefontaine, OH where his father, Keith Gimson, ran a small airport after the war. In 1950, the Gimsons moved to Atlanta, where Keith spent a career as a Delta pilot. Following in his father’s footsteps, Fred pursued flying from an early age. He met his first wife, Victoria “Vicki” Lynn Gimson, at Avondale High School (Class of 1964) where they were both in the band. They both attended Georgia State University where Fred enjoyed his time in the Pi Kappa Alpha fraternity. After Fred and Vicki married in 1969, Fred served in the US Army, stationed in Ulm, Germany from 1969-1971. Fred truly loved his job as an airline pilot. All those who got to work with him benefitted from his thorough preparation, patience, encouragement, deep knowledge and love of flying. His first professional flying job was with Eastern Airlines based in Atlanta. In 1990, the Gimsons relocated to Milwaukee, WI to fly for Midwest Express Airlines. Retiring at 60 his journey as a pilot came full circle, working as a flight instructor for Delta Airlines. So much did he enjoy this work, that he continued instructing long after his cancer diagnosis. He reluctantly formally retired a week prior to passing. As a kind, funny and loving person, Fred made many great friends. His favorite hobby was sailing, enjoying piloting his sailboat as much as his plane–or perhaps more since it was often accompanied with friends and family. Most recently, Fred and Diane enjoyed trips to St. Simon’s Island, Sanibel Island, and hanging out by the pool. Fred lovingly cared for and supported his family. He is predeceased by his wife of almost 50 years, Vicki, and parents Florence and Keith Gimson. He is survived by his wife Diane Hoey and her son David. He is cherished by his three daughters, Erica Lynn Gimson and her husband Sean of Raleigh, NC, Mary Gimson Reabe and her husband Damon of Ripon, WI, and Elizabeth Gimson Edsell and her husband Mark of Winooski, VT. He is also lovingly remembered as “G-Daddy'' by grandchildren Eulaila, Caroline, Max, Ida, and Leah. Also grieving are his brother Jack at Lake Oconee and his family and Barbara Miller of Grayson and her family. In lieu of flowers, those desiring may send donations to his alma mater, Georgia State University ℅ GSU Foundation, P.O. Box 2668, Atlanta, GA 30301-2668. The family welcomes visitors to celebrate his life with them on Wednesday, May 4th, 2022 between 4-7 pm at The Venue, 855 Church Street, Marietta, GA 30060. All are welcome.

It is with great sadness that we say goodbye to Frederick &#8220;Fred&#8221; Arthur Gimson, beloved father, grandfather, husband, brother, uncle, and friend. He died at home on May 1st, 2022 surrounded by family after a year-long struggle with... View Obituary & Service Information

The family of Fred Gimson created this Life Tributes page to make it easy to share your memories.

It is with great sadness that we say goodbye to Frederick “Fred”...