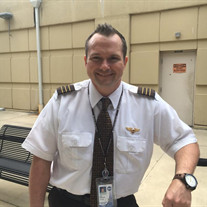 On January 12, 2022, Gary Allen McDowell Jr., 46, of Acworth, GA departed the pattern and soared to heavenly heights after a seven-year long battle with esthesioneuroblastoma. Born on May 5, 1975 in Cobb county, GA, he developed an early love of airplanes and all things aviation. Gary earned his pilot's license in 1995 at McCollum Field in Kennesaw, GA before heading to Middle Tennessee State University where he enrolled in the Professional Pilot and Aircraft Maintenance programs graduating with a Bachelor of Science in Aerospace in 2002. During his college years he interned twice for the NTSB as an Air Safety Investigator in the Seattle office. As any former Jetstream 32 pilot can tell you, Gary truly earned his first commercial hours as a First Officer for Corporate Airlines flying under American Connections. In 2004, he began the longest span of his career flying the CRJ 700/900 commuter jet for ASA under Delta Connections. Gary achieved his ultimate career goal in 2016 when he donned the brown uniform as a First Officer for UPS Airlines flying the 757/767 out of Louisville, KY. With his departure, Gary leaves behind a devoted wife of 20 years, Brooke Haywood McDowell, and children, Sarah Grace and Miller Tate, who were the light of his life and his inspiration to keep fighting. He is also survived by his mother Roxie Olivia Shead of Dallas, GA and his father Gary Allen McDowell Sr. of Dallas, GA, as well as in-laws Ken and Jane Haywood of Acworth, GA, sister-in-law Lindsay Haywood Pirlot (Gael) of Marietta, GA, and brother-in-law Paul Haywood of Marietta, GA and nephew Miles Pirlot. He was preceded in death by his step-father Larry Shead. Gary's love of aviation came second to the love of his family and the Lord. His long and valiant battle with cancer was fueled by his desire to be present for his children and instill in them a strong sense of faith. His hope was that they would see his life as a living example of God's abundant mercy and love. Gary was a true warrior and fought well beyond his disease statistics and the limits of his earthly body, but he would tell you that all honor and glory for his extended time on earth belongs to God. Gary's infectious smile and positive attitude is how most will remember him and no doubt what carried him so far in his cancer journey. Gary met every challenge head on. Unless that challenge involved a project around the house and then he met it from every direction, researched it endlessly, overbought materials, and completed about 90% of it, thus earning the endearing term "he put the G90 on it" when referring to projects. He loved working in the yard and kept a landscape worthy of a resort. Loud music was always playing in his air pods or truck and he had an eclectic taste across all genres, but adamantly excluded country. He passed his love of music on to Sarah Grace and his tinkering mind on to Miller. Gary could fix, repair, or rig anything. He was a true MacGyver. His unique sense of humor was funny because it wasn't always funny and at times was irreverent. Gary shared a Cinco de Mayo birthday with his wife and celebrated every year with a margarita in hand. If you were lucky enough to have him call you "buddy," then you knew what a treasure and joy it was to have him as a friend. A private graveside service for the family will be held at Kennesaw Memorial Park. A public memorial service will be held at Due West United Methodist Church on January 28th at 4pm. The family asks that all in attendance please wear masks to protect everyone in our community.

On January 12, 2022, Gary Allen McDowell Jr., 46, of Acworth, GA departed the pattern and soared to heavenly heights after a seven-year long battle with esthesioneuroblastoma. Born on May 5, 1975 in Cobb county, GA, he developed an early love... View Obituary & Service Information

The family of Gary A. McDowell JR created this Life Tributes page to make it easy to share your memories.

Send flowers to the McDowell family.