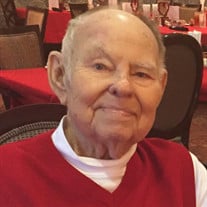 George “Buzz” Bryant, 94, passed away on April 16, 2020. George was born April 9, 1926 to George C. & Nora Jama Bryant in Charlotte, NC. He and his family moved to Georgia in 1962 and resided in Marietta, Powder Springs, and most recently, Douglasville. George is preceded in death by his wife of more than 50 years, Madge Bryant; his two sons, Michael and Wesley; his grandson, Kevin; and his parents. George is survived by his 2nd wife, Cora Bryant of Douglasville and his family which includes his daughter, Leslie Bryant; granddaughter, Kristy Yule (Sean); great granddaughters, Hannah and Olivia; sister-in-law, Linda Smith (Rick); sister, Peggy Blume; and many loving nieces and nephews, who he adored. George served in the Navy during WWII. He was honored in March with a ceremony celebrating his 70th year as a member of the American Legion. He spent his entire professional career as a salesman for Bic Pens. George was passionate about working with the youth and he spent more than 20 years umpiring baseball in East Marietta where he received recognition for his contributions. George never met a stranger and would have a conversation with anyone he met. He had a huge heart, a very generous nature and an infectious smile and laugh. He would do anything he could to help others. He enjoyed spending time at the beach, in particular St. Augustine, boating and teaching the kids how to waterski at the lake, playing cards, shooting billiards, dove hunting, traveling by RV, square dancing and spending time with his family. He was an avid golfer and for many years he coordinated golf tournaments benefiting Calvary Childrens Home. If you would like to honor George please donate to The Calvary Childrens Home in Powder Springs, https://calvarykids.org or a charity of your choice. To honor George’s request, he has been cremated. Due to gathering restrictions, the family will announce a service at a later time.

The family of George Bryant created this Life Tributes page to make it easy to share your memories.

Send flowers to the Bryant family.