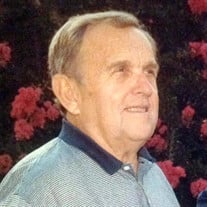 George Edward Litchfield, 89, died peacefully at home December 3, 2021. He was surrounded by his family at the time of his death. He was born June 22, 1932, in Houston, Texas to Thomas George Litchfield and Jessie Mae Litchfield. George was raised in Savannah, Georgia where he had lifelong friends and family. He served in the United States Air Force and was stationed in Japan and Korea during the Korean War. Returning home from Service, he met and married the love of his life, Roberta Ann Barbee. They were married sixty-six years. George worked as a Real Estate Developer and Builder across the South. He was partners with his best friend and beloved younger brother, Bill Litchfield, where the two earned a reputation for working hard, living life to the fullest, and cultivating long lasting friendships. George is survived by his adored wife, Roberta Barbee Litchfield. He was predeceased by his parents, his sister, Barbara Attaway, and his brothers, Bill (Dianne) and Thomas (Peggy). In addition to his wife, George is survived by his children, Lisa Litchfield Suarez and Gregg E. Litchfield (Sally), four grandchildren: Victoria Suarez Gibson (Nick) Alex E. Suarez, Jr, George Edward Litchfield II, and Winifred Anne Elizabeth Litchfield. He is also survived by his brother, Donald Litchfield (Pat), his brother-in-law, Harold Attaway, and his sister-in-law, Connie Barbee Smiley. George was the person who always gave back and never took credit. He was loved by so many people for his kindness and his larger-than-life personality. He loved his Georgia Tech Yellow Jackets, his friends, and his family, but most of all, he loved his God. He had special appreciation for his caregiver, Angela Thomas and the support she showed him. A Memorial Service will be held in the Chapel of Marietta First Baptist Church on Sunday, December 12, at 2:00 p.m. The family will receive friends one hour prior to the service. In lieu of flowers, memorial contributions may be made to The Grateful First Fund at First Baptist Church of Marietta, 148 Church St., Marietta, GA 30060 and Wellstar Hospice, 475 Dickinson Avenue NW, Marietta, GA 30064. Mayes Ward-Dobbins Funeral Home in Marietta is handling the arrangements.

George Edward Litchfield, 89, died peacefully at home December 3, 2021. He was surrounded by his family at the time of his death. He was born June 22, 1932, in Houston, Texas to Thomas George Litchfield and Jessie Mae Litchfield. George was... View Obituary & Service Information

The family of George Edward Litchfield created this Life Tributes page to make it easy to share your memories.

Send flowers to the Litchfield family.