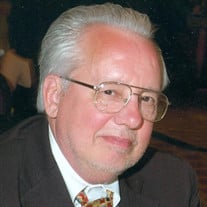 George Thomas Papuchis passed away on December 1, 2021. A Funeral Service will be held at Mayes Ward-Dobbins Funeral Home in Powder Springs, GA at 3:00 PM on Tuesday, December 7, 2021. The interment will take place in at Morgan Pipin Cemetery in Cookville, TN. George was a Nashville, TN native who traveled the world. He grew up over his father’s restaurant, the Victoria Café on Broadway, and washed dishes for the restaurant. Whenever he could he went across 5th Ave to the Ryman Auditorium, mingling with the country music stars backstage and being put to work raising and lowering the stage curtains. After high school he joined the Air Force and was stationed in Portsmouth, ME for his tour of duty. He then attended Tennessee Tech in Cookeville and Southern Polytechnic Institute in Marietta GA from which he graduated with a degree in Electrical Engineering in 1967. He returned to Cookeville to marry the love of his life and they settled in Louisiana where he worked for Boeing. He joined Rockwell International and they returned to Atlanta to raise their children. He later worked with Reliance Electric for whom he set up electric grids in multiple sites in India and the countries of Southeast Asia. I addition to travel one of his favorite activities was outdoor gardening, with an occasional golf game You could often find him sitting outside with a cat in his lap and a dog at his feet. He was an active member of McEachen United Methodist Church of Powder Springs. He is survived by his wife of 53 years Beverly Allen Papuchis, daughter Krisitian Allen Papuchis Bishop(Greg), son Jason Thomas Papuchis, grandson Keith Thomas Bishop (Chelse) and he was thrilled to learn he would be a great grandfather in June. He is also survived by one sister, Helen Papuchis Harwood, and numerous nieces and nephews. He was preceded in death by his parents, Edith Avery and Eustus Papuchis, brothers Anthony and Jason, sisters Dorothea, Mary Gladys, Trula and Nan. The Papuchis family will receive friends for visitation from 1:00 – 3:00 PM on Tuesday, December 7, 2021. Arrangements made under the caring guidance of Mayes Ward-Dobbins Funeral Home, Powder Springs, GA.

George Thomas Papuchis passed away on December 1, 2021. A Funeral Service will be held at Mayes Ward-Dobbins Funeral Home in Powder Springs, GA at 3:00 PM on Tuesday, December 7, 2021. The interment will take place in at Morgan Pipin Cemetery... View Obituary & Service Information

The family of George Thomas Papuchis created this Life Tributes page to make it easy to share your memories.

George Thomas Papuchis passed away on December 1, 2021. A Funeral...

Send flowers to the Papuchis family.