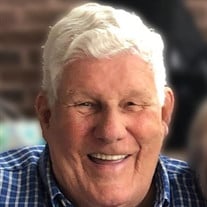 George “Bill” Wissing of Marietta, Georgia. Beloved father, grandfather and great grandfather passed away at the age of 87 on July 23, 2020. He was born May 12, 1933 in Louisville, Kentucky to George L. Wissing, Sr. and Virginia Lucas. Bill married his childhood sweetheart, and love of his life, Dolores “Dee” Bischof on January 30, 1954. Together they had 18 children. An avid student of architecture and design, he studied for 2 years at the University of Louisville before enlisting and serving honorably in the United States Army from May 1955 to April 1963. Before starting his own company, Food Service Design from which he retired in 2012, Bill worked at Holiday Inn in the Sales and Design Department for many years. He was a long-standing member of St. Joseph’s Catholic Church in Marietta, Georgia. Bill is preceded in death by his son, Patrick Wissing and beloved daughter-in-law, Angie Morris Wissing. He is survived by his wife of 66 years, Dee Wissing, their seventeen children and spouses. Robert Wissing (Amy), Ron Wissing (Sherrie), Cindy Coggins (Mike), Vicki Aghajanian (Greg), Don Wissing (Laura), Debra Dahlin (Eric), Terrie Higley (Steve), Becky Enser (David), Tom Wissing (Judy), Tamie Seivers (Gary), James Wissing (Tammy), Nancy Smith (Robert), Kathy Grove (Dusty), Jenny Murphy (Kevin), John Wissing (Nikky), Mary Varckette (Marc), Amy Collazo (Javier), 51 grandchildren, 36 great grandchildren and many step-grandchildren. Bill Wissing was first and foremost a family man. When he met Dee, who was one of eight children, Bill told her he hoped to one day have 13 children. Forever the mathematician, Bill said that when they retired, they could spend 2 weeks twice each year with each child and not have to own a house. Bill’s planned 13 children became 18 children and together they created a beautiful legacy that will live on for many generations to come. When Bill was once asked, “How do you divide your love among so many children?” he answered, “We don’t divide it, we multiply it.” When you met Bill, you immediately felt his love for life. He never met a stranger. He lit up a room with his contagious smile and made you feel like the most important person in the world. Two of the things Bill’s grandchildren said they are going to miss the most are his amazing “bear hugs” and his uncanny ability for telling jokes. His jokes were corny and sometimes crude. A warning to newcomers, you never knew what he was going to say, but it was always in humor and with loving spirit. One of his greatest talents was his witty comebacks, sometimes unexpected, but always original. Bill was forever an eager learner. He was constantly reading, studying really, and had the ability to retain information like a human encyclopedia. As one of his grandchildren said, “Papa is like Google, if you want to know something, just ask him.” He was an amazing storyteller, his recollection of details when telling stories of his life was mesmerizing. One was never bored when sitting in the presence of Bill Wissing. One of Bill’s greatest passions was always Photography. He could often be caught holding his camera and looking for that next great photo at all the family gatherings whether it be a holiday, wedding, baptism or just a tailgating party before a Braves game. His passion for buying the most updated cameras and lenses often got him in trouble with Dee. Bill has stored up thousands and thousands of photos of his travels and of his family which will be treasured and shared for years to come. Along with his photography, he found great joy in traveling with Dee around the country and the world. Some of their favorite trips included Alaska, Austria, Italy and his most recent trip to his grandson’s wedding in September to Ireland. A love for the outdoors, Bill and Dee often spent long weekends and holidays camping and fishing across the lakes of Georgia. Bill’s discovery of Bass fishing led the family through many parks and recreation areas over the years, a pastime shared with his children and passed on to his grandchildren and great grandchildren. One of his greatest joys was his annual, and what quickly became semi-annual, Bass fishing trip with his sons and grandsons down to Florida. These times of bonding and sharing their father’s and grandfather’s passion are times that none of them will forget and would not trade for the world. There will never be enough words or stories to share the life and spirit that Bill Wissing embodied. He will forever be loved and cherished by all that knew him. In the words of one of his grandchildren, “Choose to show love, share a joke, travel the world, research everything, treat everyone like family, wake up and catch that fish, share abundantly, choose to make everyone smile, have passion, tell your stories. Live your life like Papa, every day, and the world will be a better place.” Services for Bill will be on August 11, 2020 at 10:30 AM at St. Joseph’s Catholic Church in Marietta, Georgia. All are welcome. Please follow social distancing and mask requirements. Burial will follow at the Georgia National Cemetery in Canton, Georgia for immediate family only. In lieu of flowers, please donate to St. Jude’s Children Research Hospital (http://giftfunds.stjude.org/Bill-Wissing), a charity close to Bill’s heart.

The family of George "Bill" Wissing created this Life Tributes page to make it easy to share your memories.

Send flowers to the Wissing family.