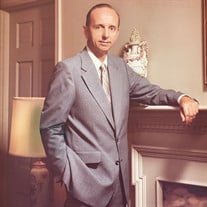 Guy Haynes Northcutt, Jr. (“Buck”), was born on July 24, 1928, and has been a life-long resident of Marietta. He graduated from Marietta High School in 1945, after being selected as “Mr. Marietta High School” by his peers. He graduated from Georgia Tech in 1949 with a Bachelor’s Degree in Mechanical Engineering. He was drafted into the U.S. Army during the Korean conflict. In the Army, he served in Arlington, Virginia with the Armed Forces Security Agency. After two years of military service, Buck returned to Marietta, employed by the Lockheed Aircraft Corporation, (later known as Lockheed Martin Corporation). He retired form there in 1999 after 46 years of service. His service at Lockheed included activities in Design Engineering, Producibility Engineering, and Cost Analysis; working on the B-47, C-130, C-141, and C-5 programs. Buck met, and in 1963, married Marvina Fergus, nee Marvina Wallingford, of Princeton, West Virginia. Marvina had two sons, George and Browning, with Dr. George T. Fergus Jr., who had accidentally died in a squall on Lake George in Florida, during a fishing trip in 1959. Buck became “Dad” and embraced his new wife and children with open arms. Buck’s parents, Guy Northcutt Sr. and ‘Miss Ruth’ played important roles in the new family, bringing stability and joy to all. Buck’s community activities primarily centered on Scouting and the Methodist Church. He had many responsibilities over the years in Scouting, including Scoutmaster of Troop 277. Both his sons remember fondly the many outdoor adventures with Dad as Scoutmaster. Ultimately, in recognition of his commitment in time and energy, he was awarded The Silver Beaver Award form the Atlanta Area Council Boy Scouts of America, the highest recognition Scouting awards adult leaders. Buck held many positions over the decades in the church he loved, Marietta First United Methodist Church. He was Church Treasurer, Church Secretary, Chairman of the Board of Stewards, Trustee, Chairman of the Building Committee for the Family Life Hall, and a member of the Building Committee to renovate the Discipleship Building. He was formally thanked by the Administrative Board for his “tireless, sacrificial and most effective efforts as Chairman of the Building Committee for the Family Life Center.” Buck was also a member of the Rotary Club of Marietta and the Marietta Country Club. He was a tireless, and passionate board member for the Marietta Museum of History. Buck was predeceased by his beloved wife of 56 years. He is survived by his two sons, a daughter-in-law Ginny Fergus, and two granddaughters Blake Fergus and Brooke Fergus of Denver, Colorado, his beloved sister Carol Northcutt Worley, along with her three daughters, nine grandchildren and twelve great grandchildren. Once in summarizing his attitude and life he wrote, “I am thankful every day; I enjoy my family and work; I have good health; I have associated with good people; and I feel appreciated!” In lieu of flowers, contributions may be sent to the Marietta First United Methodist Church or the Marietta Museum of History. There will be a memorial service at Marietta First United Methodist Church on Thursday, February 25th at 11:00 a.m. All COVID protocols will be followed during the service. The service will also be live-streamed through the Marietta First United Methodist website. https://livestream.com/accounts/24118019/events/9543286

The family of Guy Haynes Northcutt Jr created this Life Tributes page to make it easy to share your memories.

Send flowers to the Northcutt family.