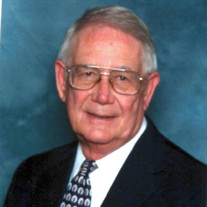 Harry David Allen, age 87, of Marietta, Georgia died on July 27th 2021, at his home, due to complications with Parkinson’s disease. Harry was born in Lafayette, Illinois on May 13, 1934. He was the younger son of Marguerite and Albert Allen. He was raised on a farm in the West Jersey community of Stark County, Illinois and attended Toulon Township Highschool where he excelled in music and won a “first rating” in state competition playing a trombone solo. Harry graduated from the University of Illinois on June 16, 1956, as an Aeronautical Engineer. He earned his Master of Science degree in Aerospace Engineering from Georgia Tech on December 4, 1971. Harry was a structural engineer for over 40 years. He retired from Lockheed in 1989. He spent additional years in contract work. He also taught Civil Engineering in the evening classes at Georgia Tech for 15 years. Harry was a licensed Professional Engineer. Harry married Alice Nowlan, of Toulon, Illinois on June 17, 1956. They recently celebrated their 65th wedding anniversary. Their 3 children, Scott, Chris, and Mary Jane were born in Charlotte, North Carolina. When Harry was not working as an accomplished engineer, he was actively engaged with youth sports and instrumental in the formation of the East Marietta Junior Sports Association in the mid 1970’s. Harry was also an active and dedicated member of John Knox Presbyterian Church for over 50 years, in Marietta, where he was an elder and the church treasurer for 20 years. He was honored at the church on Sunday, March 29, 2019, with “Harry Allen Day” in recognition of his years of service. Harry was always a “Big Ten” fan. He had many hobbies including photography, game of bridge, playing the banjo and guitar, and above all fishing. Harry was a bass fisherman. Harry was also a loyal supporter of the Boy Scouts from his early married years onward. Harry was preceded in death by his parents, his brother Duane, his sister-in-law Donna, his beloved son Chris, and his grandson Nowlan. He is survived by his wife Alice, his daughter Mary Jane Guzman and her husband John, his son Scott and his wife Alice, and loving grandchildren of Camille and Allen Guzman and John Allen. Harry is also survived by his brother-in-law Jim Nowlan and three nieces, Dorothy Cibulskis, Janice Hiner, and Joyce Henneberry and a nephew, John Allen. A graveside service will be held on July 31, 2021 at 11:00 a.m. in Toulon, Illinois, followed by a brunch at Julie’s Cafe Market.

Harry David Allen, age 87, of Marietta, Georgia died on July 27th 2021, at his home, due to complications with Parkinson&#8217;s disease. Harry was born in Lafayette, Illinois on May 13, 1934. He was the younger son of Marguerite and Albert... View Obituary & Service Information

The family of Harry D. Allen created this Life Tributes page to make it easy to share your memories.

Send flowers to the Allen family.