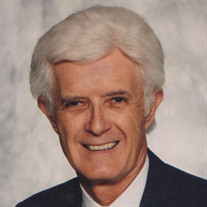 Harvey Dawson Gambrell, 90, of Marietta, GA passed away peacefully on November 13th, 2020. Harvey was born in Pendleton, SC on November 9, 1930 as the third son of seven siblings to Fred Madison Gambrell and Ressie Florence Gambrell. He grew up in Pendleton and graduated valedictorian from Pendleton High School in 1947. He earned his honors degree in electrical engineering from Clemson University in 1951. After college he served honorably for four years in the United States Army during the Korean War. He began his professional career with the Tennessee Valley Authority in Chattanooga, TN in 1955 and in 1956 began a successful 34 year career as a flight test engineer with Lockheed Martin Company in Marietta, GA. He was a key contributor and participant on many notable aircraft manufacturing and testing projects during his career with Lockheed including the C-130, C-141, C-5, L-1011 and F-111 aircrafts. He married Ruthell Payne in 1962 where they had met at Lockheed in 1958. They were married for 47 years until her passing on March 17, 2009. After his retirement, he and Ruthell lived in Flagler Beach, Florida, Bluffton, South Carolina and for the last 15 years in Marietta, GA. During his retirement he pursued many of his hobbies including Civil War relic hunting, astronomy, watching sports, coin collecting, gardening and reading anything related to history and science. Growing up on a farm during the depression, he learned very early on in life to be self-determined and self-reliant in all endeavors and the importance of education. His ability to fix, repair or build anything he put his mind to was truly remarkable thing to see as was growing a big garden and sharing his vegetables with family and friends. His green thumb for producing delicious tomatoes and hot peppers will be greatly missed. Harvey is survived by his sons, Todd (Renee) Gambrell and Ed (Patty) Fomby, three grandchildren, Tyler Gambrell, John Fomby and Kelly Taylor and five great grandchildren, and three siblings, Thelia Coleman, Lawrence Gambrell and David Gambrell. Harvey was preceded in death by his sister Jean Blackwell and brothers Fred Gambrell and Harold Gambrell. Private burial services will be held at Mountain View Park in Marietta, GA. The family wishes to thank the doctors, nurses and staff of Wellstar Kennestone Hospital and Wellstar Tranquility Hospice for their attentive care and compassion provided around the clock during his final days. In lieu of flowers, memorials may be made to Wellstar Tranquility Hospice Foundation at Kennestone Mountain or Roswell Street Baptist Church in Marietta, Ga.

The family of Harvey Dawson Gambrell created this Life Tributes page to make it easy to share your memories.

Send flowers to the Gambrell family.