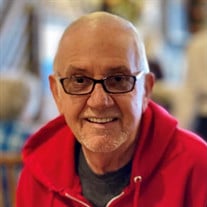 Harvey “Lee” Taylor, Jr., 75, of Austell passed away on Saturday, October 2, 2021. Lee is survived by his daughter, Kristen Crisp of Marietta; son, Harvey Lee Taylor III “Tripp” and his wife, Gena, of San Antonio, Florida; grandchildren, Rebekah Bentley and her husband, Dr Zack Bentley, of Savannah, Andrew Taylor of Roswell, Macy Taylor of San Antonio, Florida; and four great grandchildren. He was preceded in death by Dr. and Mrs. Harvey Lee Taylor, Sr. of Austell. While attending the University of Georgia, he was drafted into the US Army where he served one tour of duty in Vietnam and received several heroic commendations including the Bronze Star. Lee retired from the Cobb County Tax Assessors office, where he worked as an appraiser. At the age of 62, Lee surrendered his life to the Lord, was baptized, and became a new creation in Christ. There will be a visitation held at Mayes Ward-Dobbins Funeral Home in Marietta on Monday, October 18th from 5:00 until 7:00 p.m. A Graveside Service will be held on Tuesday, October 19th at 11:00 a.m. at the Georgia National Cemetery in Canton. Bonus granddaughter, Chaplain (Capt) Amber Kunkel, U.S. Air Force will be officiating. In lieu of flowers, contributions may be made in loving memory of Lee to MUST Ministries, specifically, “Veterans Services” in the memo line.

The family of Harvey "Lee" Taylor Jr. created this Life Tributes page to make it easy to share your memories.

Send flowers to the Taylor family.