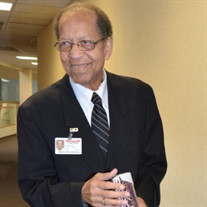 Howard D. Jones was born to the late Richard and Leona Hortense Jones on May 20, 1938. Howard went to his eternal rest on October 1, 2021, in Marietta, Georgia after a courageous fight with renal failure. He was devoted, loving, family oriented, and a humble man of God with much faith! Howard accepted Christ as a teenager and attended Fourteenth Avenue Baptist Church, joined New Covenant Church (formerly Gaye Lea Christian Church) under the pastorate of William Crowder. Howard was educated in the public-school systems in Davidson County. Howard was employed by Central Parking Systems as the manger. All who encountered him were always greeted a with a big smile. He was very dedicated, prompt, and willing to help anyone in need. Howard retired with over 30 plus years in 2004 to care for his former wife (Robbie) as her health was declining. Howard married his beloved wife (Robbie Burns-Jones) on May 24, 1987. She preceded him in death on August 15, 2020. They loved to travel, host family gatherings, play cards and help those in need. Howard was an active participant, faithful in church ministry throughout his life. Howard became a member of Mt. Zion Baptist Church in Nashville, Tennessee pastored by Bishop Joseph Warren Walker, III, D. Min. (Senior Pastor). Howard was a faithful usher for 19 years and loved greeting members and visitors as he ushered them into the house of the Lord. All were greeted with that infectious smile and gentle spirit. Howard was a member of Mt. Zion until his passing. Howard was affectionately known by his family and friends as, Daddy Red, Red, Papa & Pops! Some of Pops favorite hobbies were, bowling, going to wrestling events, watching airplanes take-off at the airport, and playing cards. Pops will be sorely missed but he has earned his wings and is now resting in the arms of our loving Savior, Jesus Christ. Howard was preceded in death by his beautiful wife Robbie Burns-Jones of 33 blissful years, survived by four sons: Maxie Allyne Patterson, Jr., Richard, Howard and Chris Jones: two daughters: Lori Latasha (Spencer) Lee, III: Lori Lucretia (Wayne) Smith, Jr.; one daughter preceded in death (Regina Jones),; two sisters: Sally (Richard) Bazel and Juanita Adams; siblings preceded in death (Jessie Turner, Beatrice Cooke, James Jones, Paul Jones, Robert Jones, Sr., Richard Jones, Jr. and Earl Jones) ; numerous grand-children, nieces, nephews and a host of extended family and friends. The everlasting memory of his strength and faith will always be embedded in the hearts of all who had the privilege of knowing him.

Howard D. Jones was born to the late Richard and Leona Hortense Jones on May 20, 1938. Howard went to his eternal rest on October 1, 2021, in Marietta, Georgia after a courageous fight with renal failure. He was devoted, loving, family oriented,... View Obituary & Service Information

The family of Howard D. Jones created this Life Tributes page to make it easy to share your memories.

Howard D. Jones was born to the late Richard and Leona Hortense...

Send flowers to the Jones family.