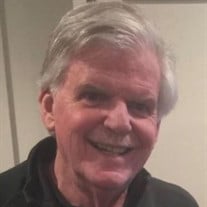 James Harold Chandler (“Jim”), loving husband, father, grandfather and friend, passed away at his home in Marietta, Georgia on August 13, 2021 at age 73. Jim was born on September 19, 1947 in LaFayette, Alabama to Clyde and Leverne Chandler. He grew up in Atlanta, Georgia and graduated from North Fulton High School in 1965. After graduation, Jim joined the United States Navy and, much to his mother’s anguish, was stationed in New Orleans during the Vietnam War. While in New Orleans, Jim attended Tulane University. After serving his country, he returned to Atlanta and received a degree in land development from Georgia State University. Jim founded a real estate appraisal firm in Atlanta in 1982, a company he successfully ran for 39 years. Jim met the love of his life and best friend, Claire Ridley Hailey (“Ridley”), in 1972 while Ridley and her friend were throwing rocks at a basement window where Jim was playing billiards. Jim’s very first question to Ridley was “What is your sign?”. While that question didn’t impress Ridley, Jim’s kind heart, quick wit, handsome looks and infectious smile and personality certainly did. Jim and Ridley married on March 16, 1974 and were madly in love for almost 50 years. Their relationship has served as a guiding light to many, especially their son, John Chandler, and daughter, Hailey Simmons. Jim had a passion for Atlanta sports (especially the Braves), music of all genres, fine food (especially steak and Varsity hot dogs), and for the love and care of his family, friends and beloved pets, which were many throughout the years. He cherished spending time with those he loved, especially his wife, children, grandchildren, and friends. Jim had a genuine and God given gift to make everyone he met feel like a million bucks. He was a loyal, lifelong friend to so many and will be profoundly missed. Jim was preceded in death by his father, Clyde Chandler, and mother, Leverne Chandler. He is survived by his wife, Ridley Chandler, son, John Chandler (Dianne), daughter, Hailey Simmons (Ryan), grandchildren, Connor Simmons, Ridley Simmons, Rhett Simmons, Eric Rose, and Hailey Rose, sister, Barbara Behl, uncle, Tom Denney (Sandra), several cousins, nieces, and nephews, and countless friends. In lieu of flowers, the family requests donations be made in Jim’s memory to Angels Among Us Pet Rescue at www.angelsrescue.org/donate. A celebration of life service will be held at a later date. Mayes Ward Dobbins Funeral Home, Historic Marietta Chapel will be in charge of arrangements.

The family of James Harold Chandler created this Life Tributes page to make it easy to share your memories.

Send flowers to the Chandler family.