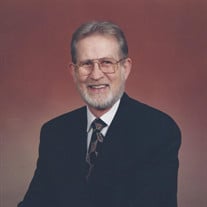 James (Jim) Willard Hendrix, 91, of Powder Springs, GA passed away Tuesday, July 7, 2020 in the home of his daughter in Georgetown, TN. A Memorial Service will be held at 2:00 PM on Saturday, July 11, 2020 at Mayes Ward-Dobbins Funeral Home in Powder Springs Ga. Born January 4, 1929 in Summerville, GA, James was preceded by the death of his parents, Henry Thomas Hendrix of Gore, GA and Addie Mae (Scoggins) Hendrix of Summerville, GA. With 8 brothers and sisters, Jim is survived by Evelyn Jones and Lee Owens and preceded by Edna Earl Hendrix, Henrietta Owenby, Wilson Hendrix, Dot Elsberry, and Bobby Hendrix. Jim graduated from Gore High School in 1947. He was called into the Military where he served in the Army during the Korean War. After military service he continued his education at Berry College and GA State before transferring to the University of GA where he graduated in 1959 with a Bachelors of Art Degree in Journalism. His career included working for a local newspaper in Summerville, Sinclair oil offices in Cobb Co, School Teacher for 7 years for elementary and middle school before joining Lockheed and retiring in 1990 as a Supervisor. After retirement, Jim enjoyed hobbies such as wood working and crossword puzzles, was a faithful member of McEachern Methodist, Powder Springs, GA and Hope Church, Dallas, GA, and enjoyed spending time with family. Jim’s favorite verse was Isaiah 41:10 KJV “Fear thou not; for I am with thee: be not dismayed; for I am thy God: I will strengthen thee; yea, I will uphold thee with the right hand of my righteousness.” Jim is survived by his loving wife Peggy Sue (Teague) Hendrix of Summerville, GA and was married in 1958. After 62 wonderful years of marriage, Jim had the following children: Janice Elaine Sprayberry and husband Jeff Sprayberry of Georgetown, TN, Mark Steven Hendrix and wife Dianna Hendrix of Talking Rock, GA, Doug Edward Hendrix and wife Martha Hendrix of Dallas, GA and Melissa Hendrix Astin and husband Chris Astin of Hiram, GA. Jim was blessed with 8 grandchildren: Lauren Jolley, Rebecca Simmons, Will Sprayberry, Hunter Astin, Emily Greenway, Jessica Queen, Morgan Dyson, Nicole Traverse and 9 great grandchildren: Aubree Greenway, Wyatt Greenway, Mason Queen, Ava Queen, Blair Astin, Addyson Jolley, Leah Jolley, Nolan Jolley, and Owen Jolley. The family will receive friends from 1:00 PM until 2:00 PM on Saturday July 11, 2020. Burial will be private for family only and held at the Georgia National Cemetery in Canton, GA.

James (Jim) Willard Hendrix, 91, of Powder Springs, GA passed away Tuesday, July 7, 2020 in the home of his daughter in Georgetown, TN. A Memorial Service will be held at 2:00 PM on Saturday, July 11, 2020 at Mayes Ward-Dobbins Funeral Home... View Obituary & Service Information

The family of James Willard Hendrix created this Life Tributes page to make it easy to share your memories.

Send flowers to the Hendrix family.