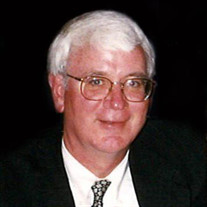 James "Jim" E. Shaw, 74, of Marietta, GA passed away on Tuesday, February 22, 2022, in Marietta, GA. A Memorial Service will be held on Saturday, February 26, 2022, at 4:00 PM at Mayes Ward-Dobbins Historic Marietta Chapel with Pastor Darrell Whipple officiating. Family has asked in lieu of flowers that donations be made in Jim's name to www.michaeljfox.org for Parkinson's Disease research. Jim is survived by his loving wife, Judy Shaw of Marietta, GA; daughter, Kendra McCool & husband Mike of Kennesaw, GA; sons, Doug Fincher of Villa Rica, GA, and Chris Shaw & wife Shea of Marietta, GA; brother, Tom Shaw & wife Gwen of Milledgeville, GA; granddaughters, Peyton McCool, Saylor Fincher, & Palmer Shaw; grandsons, Jackson Fincher, Luke McCool, & Barrett Shaw; faithful canine companion, Gracie. He was preceded in death by his grandson, Brandon McCool. Jim was born Monday, September 29, 1947, in Marietta, GA to Ralph & Mary George Shaw. He attended Auburn University and was a member of Kappa Sigma fraternity, graduating with his bachelor’s degree. He proudly served in country as a 1st Lieutenant, Platoon Leader, Airborne, Ranger, 82nd ABN Div, U.S. Army. He married the love of his life, Judy Norsworthy, in December of 1978 and they had 43 wonderful years together. During his 24 year career with Dictaphone/Pitney Bowes Corporation as an Area Sales Manager, he earned countless awards which allowed he and Judy to travel the globe. Jim had a personal relationship with God and he and Judy have been members of Eastside Baptist Church for 42 years. Jim loved sports but especially coaching his children’s baseball and softball teams while they were growing up. He had a passion for golf that was passed down from his parents which he then passed down to his boys. Most of all, he enjoyed any and all things related to Auburn University, particularly football (War Damn Eagle). His love for Auburn was undeniable and he could always be found supporting his alma mater. He had a zest for life and a great sense of humor that could sneak up on you when you least expected it. He was a hardworking man and an excellent provider. His loving presence will be greatly missed. A visitation will be held on Saturday, February 26, 2022, between the hours of 3:00 PM - 4:00 PM at Mayes Ward-Dobbins Historic Marietta Chapel. Arrangements made under the caring guidance of Mayes Ward-Dobbins Funeral Home Marietta, GA (770) 428-1511 www.mayeswarddobbins.com

The family of James "Jim" E. Shaw created this Life Tributes page to make it easy to share your memories.

Send flowers to the Shaw family.