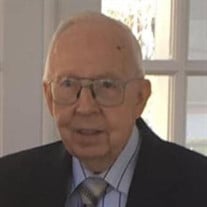 James E. (Jim) Millard, Jr. passed away peacefully on May 26, 2020. Jim was born on September 28, 1932 in Andrews, S.C. to James E. and Martha (Watson) Millard. He lettered in several sports in high school and went on to attend the University of South Carolina where he lettered on the swim team. He graduated in 1954 with a degree in Electrical Engineering. Jim was immediately hired by Lockheed in Marietta as an Electronics Design Engineer on their new airplane – the C130 Hercules. He retired from Lockheed as a Group Manager on the C130 project after 41 years. Jim was an avid tennis player and played competitively in ALTA in its infancy. He loved to garden and his favorite trip every year was to Litchfield Beach, S.C., where he spent his vacation fishing. After Jim retired, he enjoyed golfing and was on the course almost every week of the year. He spent his spare time during his retirement watching any sporting event that involved his beloved South Carolina Gamecocks. Jim was very devoted to his church, becoming an Elder Emeritus and he taught Adult Sunday School for over 40 years. Jim was a devoted father, grandfather, and great grandfather. He was a very charitable person, supporting his church and making countless donations to many charitable organizations over the years. Jim was preceded in death by his loving wife of 64 years, Nannie Sue (Colston) Millard; his father, James E. Millard, Sr.; his mother, Martha (Watson) Millard; and his brother, Edgar Rhea Millard. Jim is survived by his children, James E. (Jimmy) Millard III (Rita) of Kennesaw; Melanie Waidler (Larry) of Dawsonville, and Darryl Watson Millard of Acworth. He is also survived by eight grandchildren and seven great-grandchildren. The family will hold a private service on May 30, 2020. Mayes Ward-Dobbins Funeral Home is in charge of the arrangements. In lieu of flowers the family asks that you donate in his memory to your church or favorite charity.

James E. (Jim) Millard, Jr. passed away peacefully on May 26, 2020. Jim was born on September 28, 1932 in Andrews, S.C. to James E. and Martha (Watson) Millard. He lettered in several sports in high school and went on to attend the University... View Obituary & Service Information

The family of James E. (Jim) Millard Jr. created this Life Tributes page to make it easy to share your memories.

Send flowers to the Millard family.