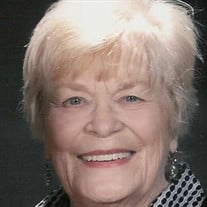 Mrs. Janet Annemarie Bohn nee MacDonald, 84, of Marietta, Georgia passed away on July 11th, 2021 with her family by her side. A funeral mass will be on August 5th, 2021 at 11:00am at Transfiguration Catholic Church. A burial at the Georgia National Cemetery will follow the service. She is preceded in passing by her husband of 57 years, Mr. Anthony “Joe” Raymond Bohn; and her parents; Bernard MacDonald and Mary Irene Campbell. She is survived by her son, Steve (Mari Lynne) Bohn; daughter, Laura Fields; son, Bill Bohn; daughter, Lisa (Joe) Fiamingo; son, Mike (Meg) Bohn; daughter, Suzanne (Mark) Buchheit; her grandchildren, Ashley (Jamie), Kelly (Steve), Brad, Kathryn (Chad), Krissy (Andy), Dominick, Joey, Bella, Abbey, Mariana, Caleb, Nick, Jake, Courtney, Emily, Amanda; and her great-grandchildren, Caeden, Ava, Charlene, Scarlett, Tommy and numerous nieces and nephews. Mrs. Bohn was born on January 14, 1937 in New York City. She was raised in the Bronx as the only child born to Irene and Bernard MacDonald. While Janet loved her life and enjoyed her childhood, she always longed for siblings. God blessed her with the desire of her heart, when having completed nursing school, she headed to Denver, Colorado where she met her husband Joe Bohn on Palm Sunday, 1961. They married just three months later on August 5, 1961, and the big family she always desired became a reality. Janet and Joe spent the next 57 years raising 6 children, three boys and three girls, and enjoying all that family and faith brought to their lives. Over the years, they welcomed 16 grandchildren and 5 great-grandchildren. Janet often commented that being a grandmother was one of life’s greatest joys! And while family was her greatest accomplishment, Janet had many other areas of success in her life. At an early age, she felt a calling to be a nurse while visiting someone in the hospital, and this calling never left her. She graduated from the Columbia University School of Nursing, New York City. Afterwards, she and a close nursing friend moved to Denver, Colorado, so they could ski. They would often ski before work each day. When telling the stories of her early career, she looked back on this time of her life with fondness and great memories. It was here that she met and married Joe Bohn. They had four children (Steve, Laura, Bill and Lisa) before they left Denver for Memphis, Tennessee, where their son Mike was born. They moved to Marietta, Georgia in 1971 and had their Georgia Peach (Suzanne). They lived in the same house raising their family for 50 years, and from the 1970’s-1990’s the neighborhood had 60+ children living there. Janet was affectionately known as the “neighborhood nurse”, even inspiring one of those children to become a nurse. She went on to balance family and career for more than 25 years, retiring from Kennestone Hospital in 1999. At one very important point in her life in 1990, Janet became the patient when she battled breast cancer. Thankfully, she became cancer-free and a survivor in 1994. Once retired, she spent her time taking care of Joe, playing bridge, which became a second love for her, reading, and spending time with family. She lived a life full of accomplishments and great experiences. Janet Bohn was a beloved wife, mom, grandma, GiGi, Grammy, confidant, and dear friend to so many. She was blessed with an empathetic ear, compassionate heart, and wisdom which influenced the lives of her family and friends. Those who loved her received comfort and a sense of calm just by being in her presence. Her smile and laughter brightened every room she entered. She lived her life to the fullest each day. Her favorite days were spent loving her children, grandchildren and great grandchildren, and she will be greatly missed. In lieu of flowers, please make a donation to the St. Vincent DePaul Society which is dedicated to helping families in need of assistance. Mayes Ward-Dobbins Funeral Home is in charge of arrangements. 770-428-1511

Mrs. Janet Annemarie Bohn nee MacDonald, 84, of Marietta, Georgia passed away on July 11th, 2021 with her family by her side. A funeral mass will be on August 5th, 2021 at 11:00am at Transfiguration Catholic Church. A burial at the Georgia National... View Obituary & Service Information

The family of Janet Annemarie Bohn created this Life Tributes page to make it easy to share your memories.

Send flowers to the Bohn family.