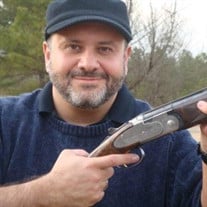 Jean Louis Constantinides of Marietta, Georgia, passed away on Monday evening, November 9, 2020, after a brief illness. The funeral will be held at the Holy Transfiguration Greek Orthodox Church in Marietta on Monday, November 16, at 11:00 a.m. John was born on February 3, 1967, in Beirut, Lebanon, of a Cypriot mother and Lebanese Cypriot father. His parents moved to Cyprus in 1975 to escape the Lebanese Civil War. John finished school in Cyprus and came to Atlanta in 1985 to attend Georgia State University from where he earned a degree in business in 1989. During his freshman year at University, then Secretary of State Henry Kissinger came to speak to the students about foreign policy. During the question-and-answer in the crowded auditorium, John raised his hand and point blank asked the Secretary of State whether he had authorized the Turkish invasion of Cyprus. Also at GSU, John met and fell in love with his future wife, Mary Mallory, and they were married in 1989. They lived and worked in Atlanta, where they raised their four children, Amanda, Alexandra, Dina, and Louis. John was talented and creative, had broad business experience, and was well traveled. Some of his favorite pastimes were hunting and shooting while placing Third in the 2000 USA Shooting National Championship for men’s trap in the final Olympic Team selection. Most recently he joined the restaurant world, first with ‘Blu’ and then with ‘Skewers,’ both establishments on Marietta Square. John was a man of sparkling wit and boundless energy. He loved his family, his work, Cyprus, and his adoptive country. He will be greatly missed by his parents, Dina and Louis Constantinides, and siblings, Alexa Constantinides and Irene Constantinides, in Cyprus; by his wife; children; grandchild, Ari Soto, and his aunt and uncle, Poly and Morris Potter, in Atlanta; and by a broad network of relatives and friends on two continents. In lieu of flowers, please make a contribution to Holy Transfiguration Greek Orthodox Church in Marietta.

Jean Louis Constantinides of Marietta, Georgia, passed away on Monday evening, November 9, 2020, after a brief illness. The funeral will be held at the Holy Transfiguration Greek Orthodox Church in Marietta on Monday, November 16, at 11:00 a.m.... View Obituary & Service Information

The family of Jean Louis Constantinides created this Life Tributes page to make it easy to share your memories.

Jean Louis Constantinides of Marietta, Georgia, passed away on...