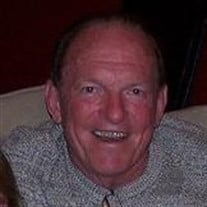 Jerry Lee Mann, 74, of Marietta, GA was granted his Angel wings on August 3rd. He passed away due to cancer; however, just like he dealt with all experiences in life, Jerry managed his illness with strength and grace, and wanted to spend as much time with his loved ones as possible. During his final days, he was surrounded by his family who he adored more than anything else in the world and friends that Jerry had touched in some small way throughout his memorable life. Jerry was born in Hamilton Ohio to James and Daisy Mann. He grew up with 3 siblings. As a teen, he loved spending his time playing baseball and managing his paper routes. As he got older, he attended Toccoa Falls Bible College receiving his BS in Missions. It was at Toccoa that he met the love of his life, Ann Jeanette Radciffe. They married in July of 1968 and moved to Illinois where he attended Trinity Evangelical Divinity School and received his Master’s in Divinity. After the birth of their first daughter, Lori Lynn, Jerry’s faith called his new family to Quito, Ecuador where they would work as missionaries at the Quito Alliance Academy for a few years before moving back to the states where their second daughter, Angela Renee was born. Jerry worked in education for many years and later went on to earn his Doctorate degree in Education and Administration from Nova University in Florida. In 2000, Jerry and Ann moved to Marietta Georgia to be close to his daughters and grandchildren and it was there that he was able to work on his second love, building and remodeling homes. His final years were spent working at his home Church, Marietta First United Methodist, directing the facilities team and leading the Church in its “Restore to Glory” program. Jerry made a lasting impression everywhere he went. He was multitalented and known as “a jack of all trades”. He was known for his humor and outgoing personality. He never met a stranger. He loved talking to people and his number one topic was his grandchildren. He lived what he preached to others. His primary message was about the love of Jesus and that we should love one another. He was “Papa” not only to his family but all who knew him. As many have said “Jerry and Ann were everybody’s grandparents”. He was an avid golfer and loved his weekends playing golf with his dear friends. He was often referred to as “hard headed and strong willed”, if he put his mind to something he was going to get it done. He did not believe in quitting or giving up on anything. His biggest asset was his family. He loved and was very loved by them. Family gatherings in his beloved “Meadows” were frequent and where many memories were made. Jerry is survived by beloved wife of 53 years, Ann, daughters, Lori (Dan) and Angela (Andrew), five grandchildren, Sarah (19), Madison (18), Payton (14), Aiden (12), Colston (5), 3 siblings (and spouses), 10 nieces and nephews and their children. He was preceded in passing by his Father and Mother, James and Daisy Mann. The memorial service will be held at Marietta First United Methodist Church on August 6th at 4:00 PM and will be livestreamed: https://livestream.com/accounts/24118019/events/9786015 A Celebration of Life reception will immediately follow in the Family Life Hall. The family asks that in lieu of flowers, you consider a donation to MFUMC’s organ fund at https://www.mariettafumc.org/give.

Jerry Lee Mann, 74, of Marietta, GA was granted his Angel wings on August 3rd. He passed away due to cancer; however, just like he dealt with all experiences in life, Jerry managed his illness with strength and grace, and wanted to spend as... View Obituary & Service Information

The family of Jerry Lee Mann created this Life Tributes page to make it easy to share your memories.

Send flowers to the Mann family.