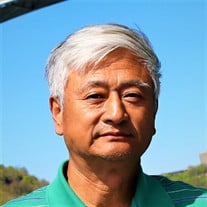 Jian Wei was born to the late Mr. Houlu Wei (魏厚禄) and Mrs. Jiawei Wang (王加维) on September 5, 1955 in Tianjin, China. He went through most of teenages years through the tough time during Cultural Revolution, yet he managed to get into college in 1981. After graduation, he became a teacher in China. He was introduced to his wife, Xiaoming, through mutual friends. They welcomed their daughter Eva in 1988. In 1990, the family immigrated to the United States, and Jian moved on to more entrepreneurial pursuits. He opened his own Eastern health business and later moved into real estate investment and management. Naturally handy, Jian always had a way of figuring out how things work. To the exasperation of his family, he would often insist on doing things himself. From tinkering on cars to household projects, he relished in the challenge and sense of ownership, including building a sunroom and a tool shed. Friends and neighbors knew they could count on Jian, as he was always more than willing to help out, even if it meant he had to go out of his way. This compassion even extended to strangers - during the 1996 Olympics in Atlanta, Jian opened his home to a group of people he just met after finding out they didn’t have a place to stay. Sometimes gruff on the outside, Jian had a soft heart on the inside, and he showed his love and caring through actions more than words. From shuttling Eva around her after-school activities to helping with her multiple moves, Jian was a constant pillar of reliability. The classic Asian father, Jian would question the value of things and seemingly begrudgingly join activities while secretly enjoying them, whether it was touring through Europe or attending a luau in Hawaii. When Eva signed the family up for an underwater scooter tour, Jian didn’t think people would want to do that, yet he was the one who had the most fun zooming among the fishes. After Eva announced the family was going axe throwing, Jian commented that you could do that with the trees in the backyard, yet he was the one who excitedly called for a picture when he hit his first bullseye. Jian was often quick to show his wit. When the family took Jian to celebrate his birthday with A5 wagyu, Jian asked when he could try A6 wagyu. Jian was also known for his love of conversation and his strong opinions. Besides antiquing and gardening, he enjoyed dinner parties and discourse with friends, which would sometimes end in karaoke. The more the alcohol flowed, the louder Jian would sing, fostering camaraderie through classic Chinese songs. He would often spend time on the phone with childhood friends and maintained those close relationships throughout his life. Jian left us on Friday March 25, 2022 at his home in Marietta, GA from [a sudden heart attack]. He is survived by his wife Xiaoming (Sharon) Wu, daughter Eva Yiran Wei, and three siblings, sisters Wei Yuan and Wang Jiefang and brother Wang Jiesheng. The memorial service will be held on Sunday April 3, 2022 at 2pm at the Historic Marietta Chapel, Mayes Ward-Dobbins Funeral Home. For those who plan to join, we’d love to hear your stories to celebrate Jian’s life. We also invite you to leave a tribute, share a memory, or send a condolence at https://www.forevermissed.com/jian-wei/about.

The family of Jian 'John' Wei created this Life Tributes page to make it easy to share your memories.

Send flowers to the Wei family.